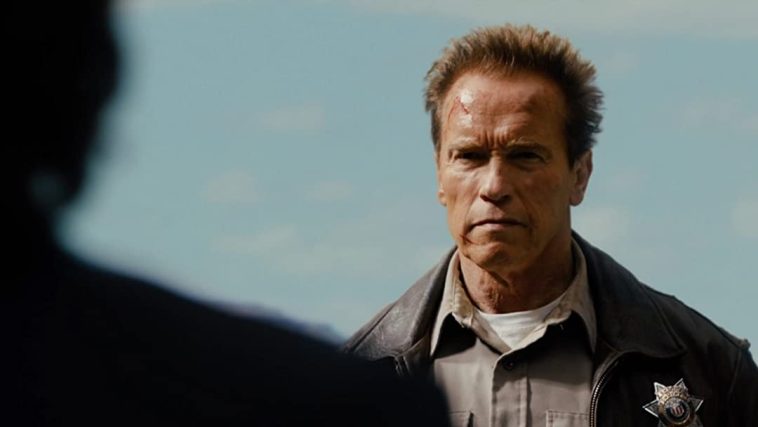 The idyllic peaceful town of Summerton Junction, near the American-Mexican border, is suddenly becoming the scene of turbulent events that will directly endanger the lives of innocent citizens. The arrival of a group of foreigners will disrupt the established rhythm of life of local residents. When they kill an old tractor driver, ruthless mercenaries set out to provoke terror, convinced that they can carry out part of the plan that will enable the carefully planned escape of the most dangerous Mexican drug boss, Gabriel Cortez. However, neither the criminals, nor, by God, the strong police forces, counted on the local sheriff and his small team of associates. A

Ray Owens (Arnold Schwarzenegger) is a man who has seen a lot of blood, has faced death so many times and knows how to deal with adversity. First of all, he is a policeman who does not lack courage, and the badge he wears obliges him to be honest and to adhere to the oath that no one is above the law. The deeply ingrained moral code does not allow him any compromise with people steeped in crime. On the contrary, they deserve to be punished, and Ray is the guy who will do his job to the end.

Korean filmmaker Jee-Woon Kim (The Good, the Bad, the Weird, 2008) debuted in Hollywood, on a project that enabled him to collaborate with a former icon of the action genre. Andrew Knauer worked on the script, although it is generally known that the suggestive director pays attention to various details, so he did not make an exception this time either. Namely, he gave numerous suggestions and proposals, which proved to be a complete success. The innovative approach is reflected in the fact that we follow most of the film as two parallel stories. The dynamic development of events brings us to the end, in which two stories merge into one. In the unfolding, the destinies of good and bad guys will intersect, from where only one side can emerge as the winner.

It is especially pleasing that the director has an ear for good action, so he serves hilarious good fights and fiery fights in the manner of old westerns. He does not neglect other segments of the story. It provides us with excellently created humorous sequences, finely spiced by parodying the basic postulates on which adrenaline-charged action blockbusters are constructed. He inspired a fresh, witty approach in the film genre, which brought enormous popularity and fame to the well-built Arnie 30 years ago.

Also, the characterization of the main character, as well as the villain, has not been neglected, which in a way prepares us for the final showdown. Remaining consistent with the genre convention, the director gave us a spectacular finale in which the collision of two completely different psychological profiles is evident (‘my honesty is not for sale’ is the essence of the whole story). The mixture of brutal violence, fierce shooting, driving stunts in the style of Need for Speed, with solidly written and interesting enough actors (at times very witty), is a clear indicator of how a satisfactory balance has been achieved here, which gives this action thriller a special dimension. It makes it incredibly watchable, not only for nostalgic people for the past 80s of the last century, but also for the younger population, accustomed to high-tech action with many CGI effects.

Arnold Schwarzenegger is definitely back on the big screen and after this, I can freely state that despite his advanced age (which he points out self-ironically in a couple of scenes), he still has something to say and show. Casting is in place, because the great episodic roles in which Luis Guzmán, Johnny Knoxville, Rodrigo Santoro, Jaimie Alexander, parade, are the best confirmation. Let me also mention the other side, the side that wants to be above the law. Spanish actor Eduardo Noriega has suggestively portrayed the character of a drug lord, an eccentric infected with speeding. I almost forgot another brilliant release in the role (and what else would he do?) Of an incorrigible bad guy, a sleazy par-excellence. You guessed it, Peter Stormare is back in his element (read: at a high level), so he imposed himself, this time as a ruthless psychopath Barrel.

He satisfied the technical aspect because it was done skillfully, he unobtrusively slips through the concept of the whole story. Camera, editing, but also music are ingredients that are functionally harmonized and contribute to making the action look visually good and sound decent. What still gives the aroma is a bunch of man who dominates in every shot, regardless of whether it is a fight, shooting or just his cynical joke. Definitely, Schwarzenegger is a convincing enough argument to pay attention to this adrenaline action thriller. You will not repent, believe me.