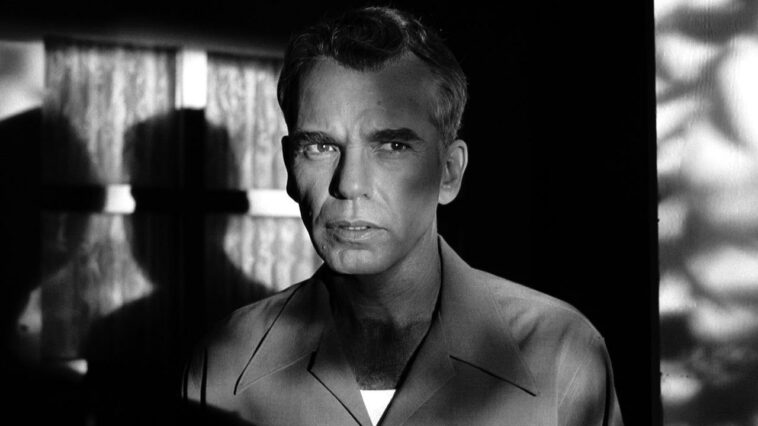 The story is about Ed Crane (Billy Bob Thornton), a simple man who does not complicate his life and works as a hairdresser with his son-in-law Frank (Michael Badalucco). His marriage to his wife Doris (Frances McDormand) has long since become a habit, so she gets into an affair with her boss Dave (James Gandolfini). One day, his shop is visited by an enigmatic businessman who offers Edu a revolutionary business opportunity – in exchange for ten thousand dollars, he will become a silent partner for the division of earnings 50-50. Eda is very intrigued by this idea, but the problem is money, so he decides to get it illegally, which includes Dave and Doris…

The Man Who Wasn’t There has all the characteristics of a classic noir that include lies, extortion, blackmail or murder. After the introductory fifteen minutes, I thought I would watch the black and white version of their debut film Blood Simple, but they are not taking a step forward in that direction, at least not in the classic sense. Specifically, I mean the fact that every move or thought of Ed Crane underlines the existential philosophy, and thus the whole narrative, so the story is much deeper than the classic noir. Billy Bob Thornton interprets a character with a minimum of facial expressions who seems a bit dull at first glance, but we soon realize that he is just uninterested, with a spontaneous comic line that characterizes him.

Because of all the above, it is easy to conclude that the character of Ed Crane is not only an antihero, but also a study of a character who has no influence on his own life at all. Whenever he does something at his own discretion or starts an initiative, everything usually ends very badly – with a series of twists, we understand that ourselves, and with each new twist, the irony grows. This is the case until the very end of the film, which represents the genre finale, but also the final joke towards the main character. We conclude that it is better not to make moves and we fully understand his indifference to his own life.

The slower neo-noir that deals with existentialism doesn’t sound too appealing, but the Cohen brothers perfectly balance the story with a tone of irony, making us follow the plot carefully, but also think indirectly outside the film. The questions the authors ask are not only about the content of the film and, although all this may sound a bit pretentious, they do not offend the intelligence of the audience at any time – the twists are surprising, but they do not seem forced or out of context.

The script is full of unique dialogues and few, but impressive characters, which has always been a characteristic of these authors. This time, they also included the narration of the main character, which is occasionally hilarious because it includes literally everything and deals with relatively irrelevant details. The tempo is lighter, which allows less important scenes to be told in full, to get to know Ed better or purely for a comic impression. Roger Dickins extraordinarily enchanted the noir with black and white cinematography with masterful use of light and shadows, which have a very important role in certain scenes.

The Man Who Wasn’t There is a stylized and ironic combination of noir and existential drama about a man who has a conflict between being and acting – the excellent Billy Bob Thornton and the realization characteristic of the Cohen brothers give fans of serious film great two-hour entertainment.