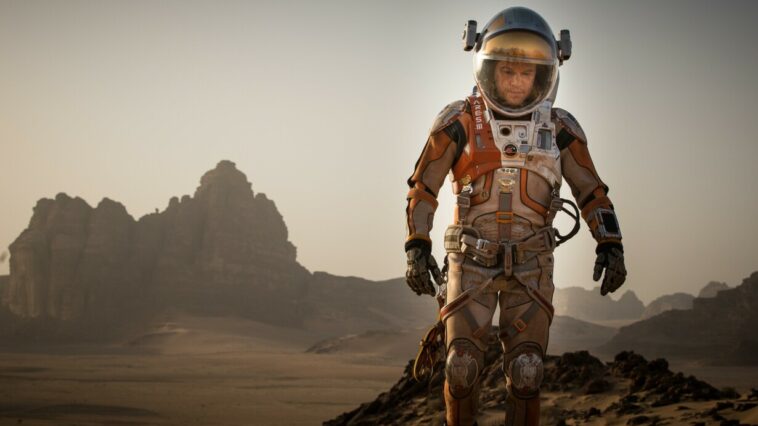 At the very beginning of the film, we encounter a human mission on Mars, which collapses due to the storm and there is an urgent retreat. During the storm, astronaut Mark Watney (Matt Damon), due to the assumption that he is dead, was left on the red planet, but luckily he remains alive. Mark wakes up in a rather inhospitable place and has to use his intelligence and physical work to stay alive until the next mission to come to Mars and to establish contact with Earth. After contacting NASA, the brain trust in that agency decides on his further destiny and does their best to bring the astronaut back home.

Screenwriter Drew Goddard was tasked with reworking Mr. Weir’s bestseller, and he succeeded. The most important characteristics of the novel are transferred to the film, with an emphasis on how the human spirit, self-belief, perseverance, sacrifice and looking at things from a brighter side make a human being persevere in the worst living conditions. The message of the novel was that no one in the world is alone and that help comes when you least expect it. Overall, the film is very optimistic, with some comic sequences and mostly exudes positivity.

It can be concluded that the script is quite linear and the plot doesn’t have any twists or twists, but it is well written in the sense that it keeps our attention all the time and just makes us keep watching. As far as my impression is, the film would be better if it was shorter by some 20-25 minutes, I would dedicate more time to Mark himself before he came into contact with the Earth and I would throw out unnecessary melodramatics in the final third of the film.

Aside from comparisons to the aforementioned projects, a lot of people compare The Martian to the movie Cast Away. In both cases, these are people who are forgotten by everyone and have to manage on their own, with the former being more dynamic due to the action and with more relatively witty scenes. Those scenes broke the monotony of depicting Mark’s life on Mars, but towards the end of the film, in my opinion, they were superfluous and pathetic. Of course, if you compare these two films, then you have to compare the acting of Matt Damon and Tom Hanks, and that really doesn’t make sense.

It is little known that according to the law, NASA reviews every scenario that explicitly deals with it, so over fifty pages of text had the professional support and support of scientists in that agency. The film is smart, it deals with technique and professional concepts that rarely any of us have encountered in everyday life, but in such a way that at no point do you get into a situation of scratching your head and wondering what they are talking about now. Nothing in the film gives the impression that something is not real and that it is impossible for it to happen.

Ridley Scott’s films are known for the superb visual impression they leave, and so is The Martian. The film looks impressive, especially in 3D, attention is paid to the smallest details and you will literally be moved to Mars or space. Special effects have been cleverly used, in the sense that they do not amplify action scenes or the like, but to evoke more the infinity and inhospitability of red sand on Mars. Scenes from Mars were filmed in Jordan, and most of the sets were made in Budapest.

I’m not a big fan of Matt Damon, but it’s obvious that he really worked hard for this role, even though his acting qualities are limited. However, it can be said that his performance is satisfactory because his protagonist is presented in a likable, witty way, especially in scenes when he keeps a video diary. In supporting roles, Jeff Daniels stands out as the director of NASA and Chiwetel Ejiofor as the head of the mission on Mars. This actor is attracting more and more attention and I am looking forward to his next projects. It is worth mentioning that Sean Bean also plays a role in the film, who, believe it or not, did not die.

With a great book as a backdrop and top-notch advertising by NASA (water found on Mars four days before the premiere), The Martian was made to satisfy the audience and make money, and he succeeded. The story is optimistic and the technical quality is at the maximum level, but somehow you can’t get the impression that this film is below expectations due to too much, somewhat unreasonable hype. I definitely recommend this movie to watch, but arm yourself with patience and 3d glasses.