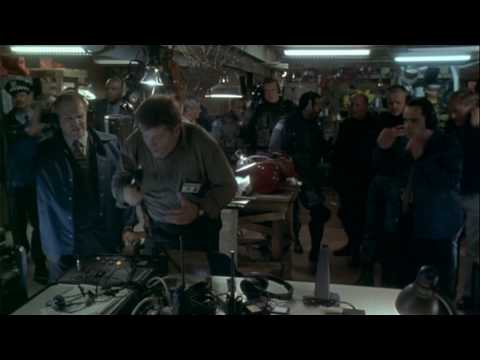 The 1990s were remembered for the explosion of police-crime films that were so exploited that it became impossible to find a project that was not full of clichés. The standard course of action (a good policeman reveals a conspiracy and opposes everyone) is seen in this case as well, but great acting, good directing and great thriller scenes make this film stand out in a sea of similar ones.

Danny Roman is a top police negotiator who is able to convince any criminal to release hostages. His colleague Nate tells him how he discovered a conspiracy to rob a pension fund and soon after that he is found murdered with evidence that suspects Danny. All his friends and colleagues renounce him and, aware of the fact that imprisonment is inevitable for him, he decides to make a desperate move. He goes to his superior’s office and takes him and several other people hostage, inviting Chris Sabian, a colleague from another station, to negotiate with him. Danny starts the race against time, proving his innocence and waiting for a violent attack by special units.

Whoever pays a little better attention to the script will recognize the numerous scenes that have been seen so many times in police films, such as the portrayal of the main character as an expert, the funeral, the motive of revenge, the scene of handing over badges and guns, family situations. The script, which is supposedly inspired by a true event, has numerous holes, but on the other hand it is quite convincing and leaves the impression that the screenwriters have thoroughly researched the psychology and the way the negotiators work. The direction is solid and quite skilful, and the whole film has a good rhythm and the necessary speed, so that it is not even noticed that it lasts almost two and a half hours.

It is safe to say that the whole project relies on the masterful acting of Samuel L. Jackson in the role of Danny and Kevin Spacey in the role of Chris. Jackson provides his standard, impulsive performance, while Spacey is quite calm and restrained, so that the two of them provide a great contrast that attracts the viewer’s attention. Of the other actors, I single out the always good Paul Giamatti in the role of hostage and David Morse. Most of the supporting roles are mostly left to actors who have gained fame on television.

This film is surprisingly intelligent, but unfortunately also surprisingly disappointing with the bad ending that is characteristic of this genre. When everything is added and subtracted, it is worth watching, but probably only fans of police films will be very satisfied.