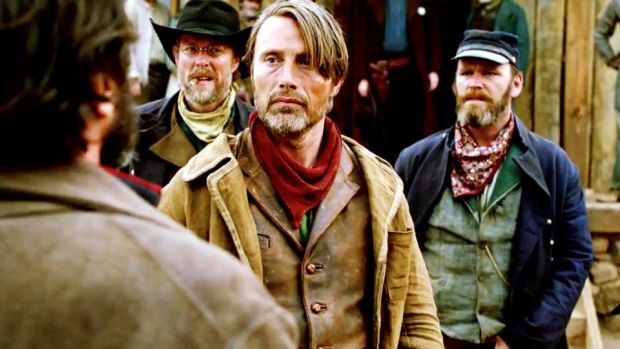 Although I recently said that I will not write recommendations for new films because you are flooded with them on a million sites, I could not help but write a review for this film, which is personally one of the most anticipated films this year, and with good reason, because I am very pleased . Although I was looking forward to the film, I did not have too many ambitions in the sense that it is a future masterpiece in the domain of this genre and the like, so my final impression is stronger than “only good” because this western drama is really strong a good “piece of film”.

Soil of America, 1870. Danish immigrant John, a calm, withdrawn, righteous family man (Mads Mikkelsen), eagerly awaits the arrival and final immigration of his wife and their son, whom he has not seen for seven years with his brother Peter (Mikael Persbrandt). When they finally arrive by train, they board the carriage because the house he built for them is outside the town. In addition to them, there are two outlaws in the carriage, Nathan and Lester, who like Mary, John’s wife, at first sight. Along the way, in a conflict that is inevitable, they throw John out of the carriage, who after a few hours follows the place where the carriage stopped and finds a horrible sight, but for him the nightmare is just beginning.

Kristian Levring is a Danish director and screenwriter who has only a few films behind him, of which the great Danish thriller from 2008 – Fear Me Not stands out. He is a member of the avant-garde film movement / movement named Dogma 95 that we have already written about. His films are dominated by dark, tense and somewhat depressing elements, which he combines brilliantly. With him, dark and depressive moments do not turn into monotony or boredom, but they themselves build that tension and dynamics of the film, which in similarly set films cannot reach the desired level so easily. This is exactly what this western drama is like, a tense, dark and at times desperate story with a brilliantly arranged sequence of events that must escalate.

Some may think that the western as a genre is extinct, but look at the movie, you will be convinced that it is not. Levring also wrote the screenplay for this film, and he had selfless help from friends, perhaps the best Danish screenwriter and director Anders Thomas Jensen (Adam’s Apples, Flickering Lights, After the Wedding).

When I first saw the announcement for the film, the first thing that attracted me was, of course, the great Danish actor Mads Mikkelsen, and then Eva Green. These two actors, especially Eva (sequels to popular films: Sin City and 300) are currently in high demand and only with their appearance can they attract you to watch any film in which they act.

I don’t have to write about Mads that he acted fantastically, that somehow started to be taken for granted. Any character to act in, film and subject matter are irrelevant. His appearance alone is enough, and then he speaks in the film. What more do we need? While, on the other hand, Eva Green does not have to say a word, and yet she can present her role masterfully. Apart from her beauty and sex appeal, she also attracts the undeniable charisma of an actress who is not challenged to act. So in this film he plays a mysterious dumb woman and we are constantly waiting for something more, more from her. Perhaps the best-fitting character in the film.

However, not only were they great bearers of this film, there is also the great Michael Persbrandt as John’s brother Peter, then the main villain Jeffrey Dean Morgan, and it is a real refreshment for me to see the former Manchester Week – Eric Canton in a bad ass release . Again.

I hope I haven’t “imposed” you too much on the film to think now that it’s an unusual wow release or a special type of film. Maybe it leaves a more impressive impression on me because I am a fan of western drama, with these dark elements. When Eva and Mads are added, it can’t be wrong. As usual, a lot of subjectivity and personal preference in the review, so this time I warn (as with the movie Locke) and take responsibility that most will probably not like as much as I do, but at least Eva must like you all like it.