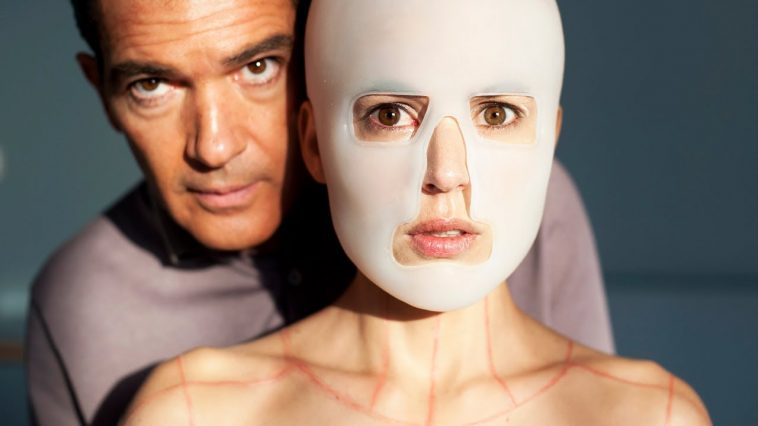 Spanish director Pedro Almodovar is known for his films that are not traditional and conventional. He deals with the main topic to the maximum, without any taboos and make-up, much more and bolder than most directors. This project is a mixture of several genres, and in addition to its traditional genre of drama, it has elements of thriller, romance, but also body-horror, which he has not yet encountered in his works.

The main character of the film is Robert Ledgard, a well-known and recognized plastic surgeon who tries to create synthetic skin that would be used during operations. His discoveries were not made entirely as required by law, because he used a human guinea pig, a beautiful woman named Vera, during testing. She is locked up in his house, served by Robert’s mother Marilia, never leaves the room and wears a rather tight cloth that covers her entire body. As the plot progresses, so begins the journey through time in the form of flashbacks, which shows the lives of the main characters in a completely new, unexpected and disturbing light.

This film definitely cannot be explained in a few sentences and it is impossible to convey impressions of the text, but the film must be watched and experienced in order to understand its complexity and beauty. Like most of Almodovar’s works, here we encounter something twisted and unusual, but the term “twisted” in this case has pushed the boundaries. The outcome itself sounds creepy and the topic it deals with is quite unpleasant, in every sense.

The script is beautifully and complexly done. The typical stamp of the director is noticeable, and that is that, as the plot progresses, the characters become more complex and complex and the plot itself is unexpected. The narrative of the action, in the form of flashbacks, holds great attention and there is no idleness. As the scenes unfold, information is presented piece by piece, not too much, but quite enough to make the viewer interested in what will happen next.

The whole project looks physically beautiful. The direction and photography are excellent and the film has a number of rather sharp shots that are not too vivid, but are beautiful to the eye. There are no scenes of explicit violence, but everything is shown quite subtly and normally, although the scenes themselves are all just not normal and everyday.

The acting is masterful. Antonio Banderas delivers top performance by acting like a disturbed, obsessed doctor. He is charismatic, attractive and masters the screen, although at times he is quite creepy and creates a feeling of discomfort. He is supported by the great Elena Anaya in a rather demanding role, which would definitely have been destroyed if she had been entrusted to a lower quality actress. Her subtlety and beautiful facial and body features are the driving force of the project and her role is getting better and better as the plot progresses. I will also mention Jan Cornet in the role of the unfortunate Vicente.

As I have already mentioned, this film must be watched, because no text about it can describe the feeling it creates after watching it, which differs from person to person. A human drama with elements of body-horror that Kronenberg himself, a master of that genre, would envy.