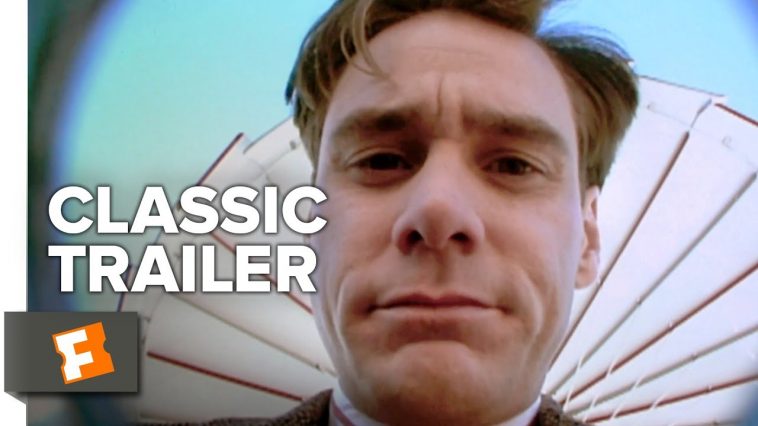 The film “The Truman Show”, without exaggeration, certainly belongs to one of the more original stories in the last two decades of the seventh art, and probably beyond. Regardless of the unusualness of this story, the intrigue it brings with it has gripped very wide masses and it can be said that this is a film that almost everyone liked. However, although in an unusual form, the basis of the story, on the contrary, is based on a topic that is far closer to us, the reality show, but by today’s standards moved to still unimaginable limits. The seemingly presented basis of the film will sound to many, perhaps like something they have already seen on a similar topic, e.g. The Running Man (1987), but “The Truman Show” is a far more sophisticated story than the ones mentioned.

For those who haven’t watched it yet, what does The Truman Show actually offer? Truman Burbank (Jim Carrey) is the first baby adopted by a corporation, no less, for the purpose of a reality show. Truman is the main star of the most watched television show on the planet, which bears his name and every moment of his life, from the moment of his birth, has been filmed and broadcast on television. However, the biggest catch is that Truman is the only one who doesn’t know that, and his life actually takes place within a huge film studio, which Truman believes is the real world. To make things more interesting, all the people around him are actors and extras, and every moment of his life and surroundings is strictly staged, and yet without him being aware of it. However, due to so much artificiality and calculation around him, a worm of doubt begins to work in Truman.

Considering the message it carries with it, the film may have appeared too early, in relation to the topicality of reality programs that were still in their infancy at the time (in the form we know it today), whose full expansion came only a little later, especially when it comes to our spaces, where at that time they did not even exist. On the other hand, this film could be called visionary in some segments, in addition to its obvious critical attitude, especially considering the limits that reality shows have reached today, and the extremes to which they aspire. However, we think that a scenario like this in this film is still fantastic and that its realization would be quite impossible in reality. We do not mean the very act of putting Truman in the position in which he was in the film, but primarily the “extras” that surrounded him.

Namely, in addition to Truman as the main star of the show, we have a bunch of characters around him who have been pretending to be his parents, friends, etc. for decades. According to such a scenario, these characters don’t really have a life at all, considering that they are in Truman’s environment for almost twenty-four hours. In our opinion, that is much more debatable than Truman’s life in such circumstances. You will agree that something like this, regardless of the amount of money in the game, is still unrealistic to perform without many incidents, for such a long period of time as this in the film (it is about thirty years of Truman’s life), and the film itself is in its description presented as a kind of sociological science fiction. After all, Truman himself eventually began to doubt the reality of the world around him. However, the aspect of the reality of the whole story is essentially irrelevant in relation to the message it carries, in the form of sharp criticism of society, wrapped in a combination of satire, drama and completely satisfying humor.

Let’s take a look at Jim Carrey’s acting as Truman Burbank. This is, so to speak, his first serious role, in terms of a role in a film with elements of drama, as opposed to his additional roles in films such as The Mask (1994), Ace Ventura (1994) or Dumb & Dumber (1994), which are after all celebrated. Namely, at the time of this film, Kerry was mostly known for “mugging”, so it was difficult for many to see him in a more serious role like this. However, regardless of the dramatic tone in this film, Truman is not completely operated on by the classic Kerry with grimaces (although it cannot be said that this is a minus in this case), and his “more serious” roles, in which he was more unrecognizable with the acting aspect followed only in films such as Man on the Moon (1999) and Eternal Sunshine of the Spottless Mind (2004).

All in all, Kerry did great in the role of Truman and this, in our opinion, is one of the better roles in his career. Also, a great contribution to this achievement, albeit with an episodic role, was provided by Ed Harris with his role of Christoph, the ideological leader of the entire Truman world. The character of Christophe himself is also very interesting, because it well shows how one perverted person got the epithet of a genius, whose legitimacy is secured in a world with a disturbed value system. In addition to great acting, scenes and everything related to this film in general, we would especially like to mention the extraordinary music in the film, which especially attracted our attention and completed the whole experience, thanks to the ingenious compositions of Burkhard Dalwicz and Philip Glass.

Overall, “The Truman Show” deserves our highest marks, from every aspect. A film reading that everyone must watch.