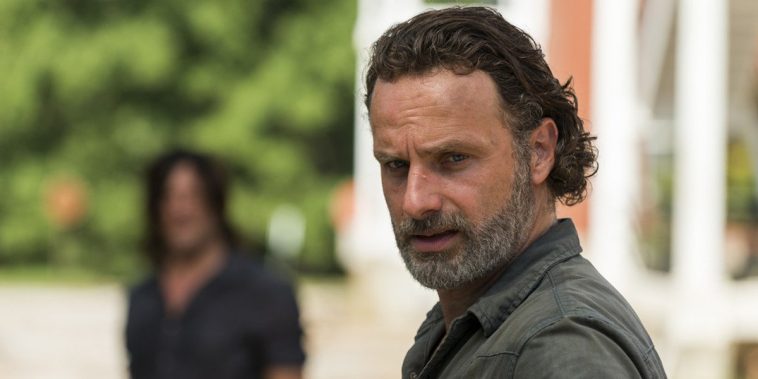 As someone who mostly despises the mania around zombies and vampires and stays away from such topics in the film domain, I can say that I have greatly overestimated my strong will that gave way before this series. Namely, I started watching this series at least three times before (when it first appeared and was the most popular and must-watch) and each time I gave up somewhere on the second episode (of course the first season) with various arguments justifying myself why not continue to watch. I didn’t have the patience to scratch under the surface then, and I rejected it too lightly and put it in the mold of passing one-season sensations – nonsensical series about zombies. What a mistake because, after all, this is not a series about zombies at all.

This horror / drama series is based on the popular comic book of the same name by Robert Kirkman, who is of course one of the producers of the series. The plot of the series is mostly known to everyone: Officer Rick Grimes, after being wounded on duty, wakes up alone in the hospital after some time spent in a coma. He soon realizes that a zombie apocalypse has happened, and he tries to find his wife and son, whom he knows are alive. He finds them alive and well, together with his friend Shane, and soon becomes the leader of that group of survivors. Most of the action takes place in a rural part of America in the state of Georgia. In the hope of a better tomorrow, they are constantly on the move, looking for a peaceful place (at least for a moment) for any life, and because of that, they are in dangerous situations every day. As their situation becomes more dangerous day by day, the desire to survive as well as the inevitable despair drives some of them to the brink of madness. At every step, they are faced with unbearable horrors brought about by encounters with the so-called “Walkers”. As if that wasn’t enough, they also encounter hostility from other scattered groups of survivors who are concentrating on their survival now that the structure of global society has collapsed.

The first season consists of six episodes and brings us an introduction to the story of the series, the characters and the situation. I must say that the first season is unsurpassed in its freshness, originality, fluttering of viewing as well as indisputable quality, in general, all the positive things that characterize a series. The main and central character of the first season, in fact the main protagonist of the series, is police officer Rick Grimes (Andrew Lincoln). A just, honest, very moral and ethical, after all, a family man who would do anything to protect his family, as well as the people who depend on him. His family consists of his wife Lori (Sarah Wayne Callies) and son Karl (Chandler Riggs). The group of survivors for whom Rick as their leader becomes responsible still consists (among others) of his friend police officer Shane (Jon Bernthal), Daryl Dixon (Norman Reedus) hunter in the group, Andrea (Laurie Holden), a labile woman, once a capable lawyer, Glen Steven Yeun) a nimble and agile Korean, otherwise a pizza delivery man. At the end of the first season, he takes this group to a research center with a certain doctor, Edwin Jenner, who is hiding a terrible secret.

In the second season, we have the stability of the scene, but the instability of the psyche of most of the characters in the story. The second season brings us some new characters, such as Maggie Green (Lauren Cohan) and her father Herschel (Scott Wilson), but also the death of some old ones and exudes a lethargic pace that is more calm in terms of action in any sense. It focuses on the relationship between two good friends, Rick and Shane, who will change permanently and zombies will have nothing to do with it.

The third season takes Rick and the team to jail as the next place where they decide to stay and try to survive for a while. A season in which we actually have the format of the second season, which only changed the environment, which became even more dangerous with new, intriguing characters. This season, in my opinion, had the most potential for elaboration, but it still failed because it made almost identical to the previous one in terms of everything, and the plot is just spinning in a circle. Killing hitherto constant characters, bringing in new ones. Still, the third season brings two fantastic new characters, the character of the evil and dangerous Governor (David Morrissey) and the character of the mysterious woman Michon (Danai Gurira).

The fourth season, in my opinion, returns to the roots of the first in every format and in quality and freshness, somehow brings us the story of the characters themselves, not just the way we met them at the beginning of the first season, but quite changed and mature. Zombies have long been in the background in this series, and the fourth season brings the real essence of what is actually the biggest danger in a world that is following the apocalyptic path.

The creators of the series in the screenwriting, production and directing domains are, among others, Frank Darabont and Robert Kirkman. Frank Darabont is a well-known screenwriter and director who has been nominated for three Oscars. His most famous film is definitely the great and well-known 1994 film The Shawshank Redemption, as well as Majestic, The Green Mile or The Mist. He designed the whole series because he was the first to think that Robert Kirman’s comic book of the same name could be turned into a television series that would primarily interest viewers with intriguing characters and dangerous situations, while the horror element, zombies, would be just a passing spice. He thought of it as a story about the survival of a group united by circumstances. So, the highlight of the series is of a dramatic character, the center is the relationships of the characters and their doubts, beliefs, hopes and more. Robert Kirkman is a comic book writer who experienced great fame after the start of the series and who is preparing a ton of more imaginative projects for us, and there is talk of possible spinoffs, as far as The Walking Dead is concerned. Of the other names working on the series I will mention: Scott M. Gimple, Glen Mazzara and David Alpert. Like all segments of one series, a lot of attention was paid to music. Most of the songs were composed by a certain Bear McCreery, and a melody from the third season of Ben Nichols caught my eye (and ears), and the title of the song is The Last Pale Light in the West, which is a tribute to the return of the Governor.

Andrew Lincoln, who plays the main protagonist of the series Rick, may not be a more resounding actor’s name (it was then, at the time of the series), but he has certainly found his place in the acting world now and is a really great choice. in the end, he forcibly changes him into something he has to be in order to survive, even though he always thought he didn’t have it in him. His transformation of the character from the first episode from the first season until the fourth season is amazing at times, especially in the fourth season because it shows us all the possible emotions and states in a man in different situations. He is masterfully convincing and carries the whole show on his back, just as his character leads the group all the time.

I must also point out my favorite character, Daryl Dixon, a hilby and a redneck, a wanderer, a man who never cared about anything, but only at first glance. He is played mainly by a supporting actor from the movies, the shadow actor Norman Ridus. Norman originally came to audition for the character of Merle (Merlea is played by the great Michael Rucker) and did not pass, but the producers did not want to lose one such actor, so they strictly designed the character of Daryl, Merle’s brother. Neither of these two is like the characters in the comics, but they both both created and deserved their place in the series and are a real refreshment in the form of the characters they act in terms of the prejudices we mostly have for such characters.

Sarah Wayne Collis (known as Sarah Tancredi from the Prison Break series) had, one might say, not so likable, not to mention the infamous role of Lori, Rick’s wife, who got involved with his best friend Shane and caused a lot of problems. She did her part in moments of irritatingly labile bitches effectively. Rick and Lori’s son is played by a young American actor Chandler Riggs, a 15-year-old who could become a great actor because he really convincingly played Karl, at first an unbearable and irritating brat who doesn’t really understand the danger of the situation. grow up in a world that brings him nothing good.

If I continue like this about each character I will write a longer paragraph. That would never end then, so I will just say that all the actors, but all of them, did a great job, adapted and convinced us that they are really the way they presented them to us and in no way different. Of course, I am aware that you have your favorites both in the comics and in the series, and that you might like me to say a few words about them, such as about Glen or Andrei, but I chose the above purely because they left the strongest impression on me, whether it was positive or negative in the end.

This impression had to be written because I watched four seasons in four days, so everything has been filmed and shown so far. Not even the series that I appreciate more and that are certainly much better and better have had such treatment than me, so I join all the fanatical fans who are waiting for the next season, as we have been waiting for the sun this summer. Don’t worry, there will be no zombie apocalypse or anything like that. We will welcome the fifth season this year. So far, we have survived at least 10 announced endings of the world, but if we continue to follow the path that humanity is currently taking, less and less caring for the people themselves, we will destroy ourselves. This is what this series is really about. Maybe this series was created based on someone’s creative idea and imagination and just for profit, and I can list all possible motives, but the undeniable fact is that in the end man is not in the greatest danger of a potential nuclear accident, some natural and devastating catastrophe or a deadly virus. All this is camouflaged in this zombie apocalypse and can be interpreted in a metaphorical and symbolic way, and that is why I prefer to find a deeper essence in everything viewed, because the series left a really strong impression on me.