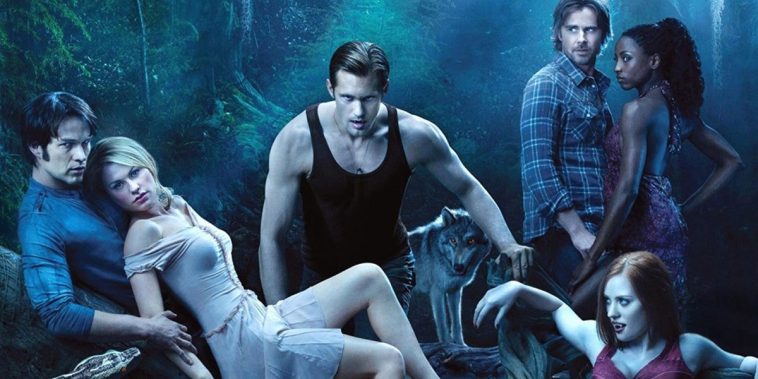 As vampires and werewolves are my favorite monsters, I have been waiting for a long time for a series to appear that will present it in a serious way. When I say serious, I mean that horror / supernatural series have gone before, but somehow always mild, in order to fit in with the availability of a wide audience, which is why they were, in the absence of better expression, lukewarm. Sometime in late 2009, quite by accident, browsing the net in search of a horror series, I came across True Blood. That’s when the second season just ended, I said I’m going to try it and that’s how I get both seasons, I play the first episode. Within 48 hours, I slipped 2 seasons and I stayed eagerly waiting for the third, then the fourth, and so on every year until this summer, when the series ended, with seven seasons behind me.

The author of the series is a very famous producer, screenwriter and director Alan Ball. Prior to this series, he had an extremely successful and award-winning series, Six Feet Under, for which he also won an Emmy Award. In addition, he wrote the screenplay and won an Oscar for it, for the film American Beauty. As an experienced and excellent author, he managed to take advantage of the gap when it comes to series of this genre and gather a phenomenal cast, while adding a rich HBO production. By the way, the series is based on the popular novel series The Southern Vampire Mysteries written by Charlene Harris. Experienced played, goal achieved. The series was a great success around the world, and created an army of fans. She also launched the film careers of many relatively famous actors until then.

The story takes place in the fictional town of Bon Temps in Louisiana. A new reality reigns in the world. The vampires came out of the closet, that is. revealed to the world their existence. Peace has been made between humans and vampires. The guarantee of that peace is the synthetically made True Blood that vampires feed on. So there is no mutual slaughter. Vampires have their own government and hierarchy that is aligned with the rule of humans. This reality is slowly coming to the small town of Bon Temps in the form of vampire Bill Compton (Stephen Moyer). He was hundreds of years old, and he comes from Bon Temps, where he has a house. As in any small environment, any difference is hard to accept, including this vampire one. Bill finds understanding only with the young waitress of Merlot’s restaurant, Suki (Anna Paquin).

However, Suki is not an ordinary girl, and she is different, that is. has the power to hear other people’s thoughts which has led to countless problems and rejection from others throughout his life. However, Bill Compton’s thoughts cannot be heard. The two enter into a complicated relationship that will lead them through unimaginable adventures, joy, danger, horror, happiness and sadness. What few know is that vampires are not the only different beings. The others are still hiding in the dark.

There are many reasons for the success of this series, as well as the reasons why this is one of, my personal, favorite and best series I have watched. Of course, seven seasons is a long time for one series and she struggled with various challenges, complicating the story, and even a drop in quality at certain moments, but despite that, she managed to keep millions nailed to the screens in anticipation of a new episode.

As far as technical things are concerned, suffice it to say, HBO is in its full glory, which means that the production is at the highest level. Great script, as well as directing. A special addition is great music. What I would point out is the title track Bad Things by Jace Everett, which follows the introductory spike, to me personally one of the best and most original I’ve watched.

When I tell anyone about this series, the first thing I emphasize are the characters. There are many of them, and all of them are special and completely elaborated in their own way. No series, and I’ve watched a record number of them, has so many great characters, with their amazing stories, and so much attention has been paid to each of them. A quality cast has ideally connected the actors with the characters they play, and you simply trust them. There are too many characters to mention them all because it would take pages and pages, but I will mention some of them.

Ana Paquin, who plays Suki, is the center around which everything revolves. In addition to her power to hear the thoughts of others, she is indecisive and torn, direct, hairless on the tongue, mature and childish at the same time, wise, yet incredibly cunning, strong and weak, and thus endlessly combining some incompatible traits, and just because of that, she will bring herself and others many times into a lot of trouble, which will bring her the epithet of the most irritating character among the fans. Stephen Moyer plays Was a Vampire Who Didn’t Become of His Own. Because of love, he will travel from hell to heaven and back, many times. He always tries to be correct and the voice of reason in madness.

Alexander Skarsgård plays Erik, a thousand-year-old vampire, a powerful Viking leader in his day. Eric is the vampire sheriff of the area where he lives and runs the vampire bar Fangtasiu. By the way, he is the most popular character in the series (especially the female population). Erike is brutal and in that brutality he is endlessly funny. He is accompanied by his “descendant” Pam De Beaufort, played by the phenomenal Kristin Bauer van Straten. The two are a tandem of bizarre dreams. Ryan Kwanten plays Bitch’s brother Jason (my favorite character). Jason is a local seducer, of perfect appearance and not so perfect mind. His character will go through many transformations and survive everything and anything, but in a completely bizarrely funny way, that you just can’t help but love his character. Nelsan Ellis plays Lafayette, a cook, a dealer, a prostitute, a sorcerer and what not. In addition, he is gay with amazing clothing experiments.

So I could until tomorrow because there are a lot of characters and, as I said, that is the greatest strength of the series because each one tells a special little story, and those little stories somehow intertwine and give us a unique Bon Temps rhapsody experience. Don’t be fooled by these colorful characters, as if they came out of Alice in Wonderland. The series is quite violent and brutal. Blood is pouring in all directions, there are dead people on sale. Explicit sex scenes as well. When you add it all up, it’s a pretty mixed horror / sex fantasy that you won’t find anywhere else, which is another great strength of the series.

In the end, that special ingredient is the stage itself, that is. the magical south of America, as created for a horror story, with its wooden houses, swamps and willows. When you add to that the hilarious accent and special mentality of the people of that area you get something really unusual.