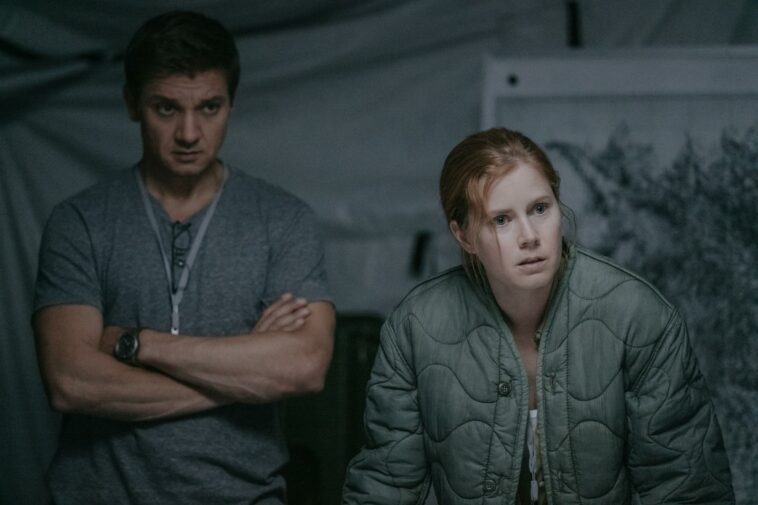 After the arrival of twelve mysterious spacecraft, one of which landed in the United States, an elite team of experts gathered to try to make contact with them. Among them is Luis Banks (Amy Adams), a language expert, who has her own methods for trying to communicate, and is overseen by the suspicious Colonel Weber (Forest Whitaker). The army insists on important and quick answers in the fear of global war, so Luis, in collaboration with physicist Ian Donoli (Jeremy Renner), decides on drastic steps that could endanger her life, but also the entire civilization.

This film intrigued me because it comes out of the typical mold of films about aliens, in which they usually come to enslave or destroy us, and people heroically defend their planet from the occupiers (Indepedence Day, War of The Worlds (). Instead of invasion or war, aliens come to help us or to understand us, without the intention of any conflicts. In my opinion, the attempt to communicate and understand aliens is a much more interesting and intriguing concept for a film, instead of a simple intention or need to refute them.

I understand that the mention of linguistics does not sound spectacular to present the whole work, but in this film, everything related to it seems really fascinating. The bizarre ways in which space creatures communicate are very interesting, and the team’s attempts to decipher them are exciting and quite tense. One of the characters says that understanding language shapes the way of thinking, and as they move away with deciphering, they conclude that these aliens experience the concept of time differently, which is reflected in the symbols that make up their sentences. In addition to the basic plot, which is mysterious and a bit cold due to the aliens, the film is permeated by a side story that includes Luis and her daughter, and that story is quite humane and emotional.

Danny Villeneuve was up to the task again. Unobtrusively and dramaturgically subtly, it introduces us to a world in which one wrong decision or mistake in interpretation can mean disaster. He remained consistent with his style, which includes emphasizing a slightly gloomy atmosphere, a slower rhythm of the action and a series of authentic and somewhat disturbing shots without too many explicit details. This time, he also used visually refined CGI effects exclusively in the service of the story, and not to achieve some wow impression. Careful guidance of the camera captures every essential segment and gives appropriate meaning to every detail. The director is also collaborating on this film with the Icelandic composer Johan Johansson, who is in charge of the music sections.

The influence of several well-known sci-fi films is evident. First of all, I mean Close Encounters of the Third Kind, which also deals with making contact and communication with aliens. The difference is that in that film, the contact is made in a spiritual way, while here the emphasis is on language. Also, 2001: A Space Odyssey must be mentioned. Mysterious flying objects are very reminiscent of the famous monoliths from the film, and some scenes are irresistibly reminiscent of Kubrick’s masterpieces.

However, Arrival is not without flaws. What bothered me the most was when a group of soldiers, unprovoked, significantly influenced the whole plot in the film, and their action was more sci-fi than the arrival of the aliens. A couple of hours after watching it, I came to the conclusion that the method of writing with a marker of English words on a piece of white plastic is not the best way to communicate with aliens, but well, I’m not an expert like Mrs. Banks. It was not possible to avoid that traditionally China and Russia were the first to rattle weapons. Also, except for the character of Louis Banks, everyone else seems almost unnecessary – it would not be noticed that they are not in the film.

Amy Adams is the queen of the Oscar season and has been releasing at least one good film for years. Here, she provides a steady performance and presents almost the entire film on her own – her character is calculated at times, while at times she is extremely sensitive. With this role and the role in the film Nocturnal Animals, it would be a real miracle to be bypassed by well-deserved film awards. Jeremy Renner’s character provides the film with a sense of humor and doesn’t do anything concrete until the very end, but the actor generally managed in this role. They are supported by strong character actors in the form of Forest Whitaker and Michael Stuhlbarg, who plays a CIA agent.