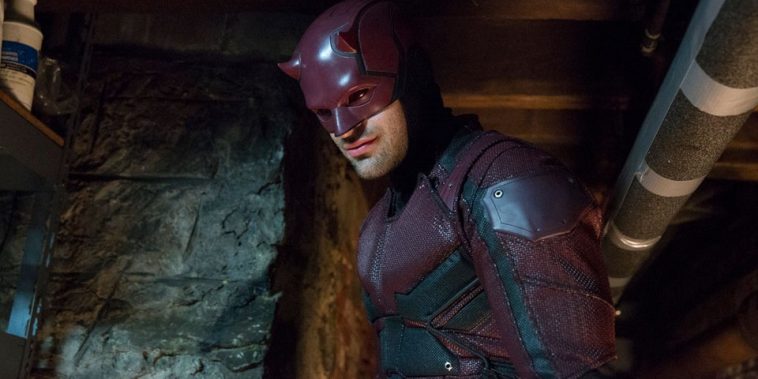 The world has been under siege in recent years, or to say invasion. Beings with a diverse arsenal of superpowers, or with superpowers, have taken up vast territory and built strongholds. Their power is growing, as is their numbers. All the assumptions that this growth and power must come to an end, as every empire has come to an end, do not drink water, still. They are still sovereign and expanding. Of course, I’m talking about the world of film and the dominance of content, both film and series, about superheroes from the Marvel or DC world. Personally, I want the rule to last and for them to do what they do as well as possible.

Dardeville is a hero from the Marvel universe, when he created Stan Lee. He gained his super powers as a boy, after an accident in which he lost his sight. However, that loss brought him much more than he took. All other senses became supersensitive, and he, superior to other ordinary mortals, became a superhero. By the way, when he is not wearing his costume, Dardeville is Matt Murdoch’s lawyer, who defends those who have no one to defend him, and when justice disappears in corrupt courts, Matt puts on his costume and brings justice to those who deserve it.

In 2003, Dardeville stepped into the world of film, where he was played by Ben Affleck, and many want to forget that he was filmed. Twelve years later, Dardeville reappears on screens, this time small, in the eponymous series brought to us by Netflix. A season of 13 episodes and almost as many hours, Netflix has rolled out all at once, as they usually do (which is why they are the most productive, super kings), and it is the first of four announced series to watch Marvel’s superheroes. a mini series with all four heroes together in the form of Marvel Defenders. Until the others arrive, let me tell you which one, about the just finished first season of Daredevil.

Like I said, I’ve been looking forward to this series. There are several reasons, and the most important are: Dardeville is a very interesting character, especially darker than most others, so I expected a more serious and darker series, compared to the existing ones. Second, Netflix. Third, the announced cast is phenomenal: Charlie Cox, Deborah Ann Woll, Elden Henson, Vincent D’Onofrio, Vondie Curtis-Hall, Ayelet Zurer, Bob Gunton and Rosario Dawson. When it finally came, most of my expectations were met and as I guessed, Daredevil is the most serious series from the world of superheroes I’ve watched so far, and I’ve watched them and I’m watching them all.

The series uses all its 13 hours and slowly builds the story of the origin of Dardeville, as well as other characters who make up his world, whether friends or enemies. The dice are slowly coming together, developing, growing and creating one very interesting and tense story, which will keep you going all the time, if you are a fan of the genre, and probably many who are not. The story is dramatically slower, but also explosive when it should be. All the characters were given enough space to develop and fully conjure up and present an imaginary scenario of the creators, whose main goal was to create an extremely solid foundation for the Daredevil seasons that will surely come to us, and they completely succeeded. They built the foundations slowly, and with quality, to make sure there were no cracks, both in the characters and in the story.

A great cast joined the quality script. Maybe many were skeptical about choosing Charlie Cox for Dardeville or other actors for their supporting characters, I certainly did, but I had faith that Netflix knew what it was doing, and I wasn’t wrong. Cox has done extremely well in the role of DD and I am sure he is the right choice. Especially when he puts on his lenses and mask, and you shouldn’t waste words on physical readiness, because he did everything without a mistake. He also faithfully portrayed the appearance of a blind man. Elden Nenson in the role of Fogi, also great. The main ones are responsible for the funny side of the series, more precisely the only character who brings the light of humor into the dark world and he does it great.

Deborah Ann Woll, who we all remember as Jessica of True Blood, is up to the task, just as she was in TB. I believe we will see her in many more movies and series in the future. In the end, the actor I was most excited about was skeptical. This is Vincent D’Onofrio, a proven and experienced actor with a wide range of different characters and roles he played. However, is he the right choice for the role of Wilson Fisk or Kingpin, one of Dardeville’s biggest rivals. Kingpin is a very special character, primarily in appearance, bald boulders in a branded suit, and yet as big, as agile and dangerous.

For 13 episodes, I struggled with Fisk and Vincent’s role. At times it wasn’t that, it was kind of funny to me with some facial expressions, movements, gait, completely different and insecure in relation to how I imagine Kingpin should look, and then it transforms again into a dangerous and deadly machine, right as I wish and dispel all my doubts. By the end of the season, he completely convinced me that he was the right choice for Kingpin and every part of him. Of the others, he would single out Vondie Curtis-Hall as journalist Ben Uric and Rosario Dawson as Claire Temple.

When you combine a great script, with a great cast, you need to technically follow it up to get the perfect movie product. If anyone knows how to do it, Netflix knows. The production is at the top level. Sets, directing, photography, music are all in the service of the Daredevil atmosphere. The look of Hell’s Kitchen itself is just right, comic dark. The camera follows Dardeville phenomenally, especially in his stunts over rooftops and fight scenes, and the fights were done great. The choreography is carefully designed and you can see the difference in relation to other series of this genre. DD has some fantastic moves, and they are again expertly shown and served to us. The effects are very high quality, so as far as the technical side of the series is concerned, I have no complaints.

The only objections to the whole season, due to which this is not a pure ten, are at times excessively long, in the traces of the pathetic, romantic scene of Kingpin and Vanessa. Also, one whole episode of Meta and Fogi and their specific trust issues, so the season could have been an hour shorter with the same effective effect, but it’s just me, maybe you don’t mind. In any case, that does not diminish the excellence, which is strong in this series.

For the end, some little things that completely bought me. First, Dardeville reminded me of another comic book character I read as a kid, and that is Mr. No. Although they have nothing to do with the genre, they have one thing in common. As much as both of them are the main positive characters, heroes in their universe, capable and dangerous, so much of both have an exceptional sense of acceptance, reciprocal amounts of beatings, the one they give to the bad guys. Secondly, there is one fantastic scene of a fight in the hallway, shot from one frame, which is incredibly reminiscent of similar ones from the movies Oldboy and Raid 2, and for that, all credit to the creators, because I don’t think it was a coincidence.