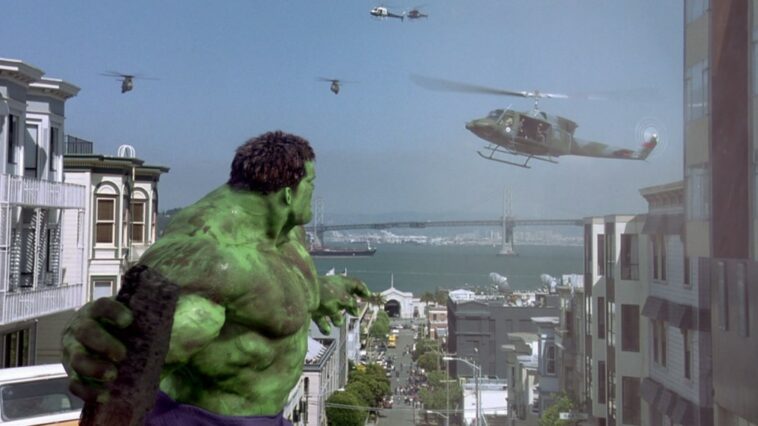 Namely, in 2003, Lee directed an art-house action spectacle, no less than about the Hulk, one of the characters from Marvel’s chest who is almost completely devoid of character complexity on the first ball and who is mostly described by the phrase Hulk smashes !. How wise was it on his part to give such a character room for characterization and to re-examine the myth and ideology of such a fictional character with more serious tendencies? The answers to that question are extremely divided, so today we have those who include Hulk on the list of the worst comic book adaptations, and on the other hand, there are those who take him for the boldest and most underestimated endeavor since such films exist. I can proudly say that I belong to this other group, which is extremely respectful and enjoys what Lee imagined and effectively realized.

What could, and judging by the voice of the majority, must have been a simple story about a misunderstood hero’s fight with the world around him and which many want to abuse, as well as his ungrateful but extremely powerful ability, here we have a story about a man who re-examines the whole his life from early childhood until the moment he finds himself trying to find an explanation for both the power he possesses and the anger, bitterness and anger that awakens in him every time a monster he can’t control. It is also a story of understanding, trauma and a cause-and-effect relationship that leaves an indelible mark on each of us.

As inadequate as this material may sound for processing such ideas, after a little over two hours we will realize that even one Hulk has meat to characterize and analyze – that’s what comic book creators certainly had in mind, but that’s the primary focus. justifiably put on Hulk smashes! aspect. The lively tone and dynamic tempo characteristic of Marvel films in particular has been replaced by a more serious, cooler atmosphere and a pace that gives way to the elaboration of the driving idea behind the main character. There are almost no witty jokes, so the emphasis is on a realistic approach to comic fantasy, which contains much more than just an action spectacle.

The story follows nuclear physicist Bruce Benner (Eric Bana) who, due to an accident in one experiment, is irradiated with modified gamma rays, which he soon discovers that under the influence of personal rage he turns into a gigantic green monster over which he has almost no control. His girlfriend and associate Betty (Jennifer Connelly) soon finds out about his handicap, and is determined to help him. The situation is further complicated by her father, General Ross (Sam Elliott), who sees in the Hulk endless potential that could be used for military purposes. His father (Nick Nolte), with whom he had not had contact for a long time and who still had an indirect influence on his current condition, is still returning to Bruce’s life.

This plot was just a piece of paper for drawing spectacular destruction, but here it still served for much more than that. What is anger and what is its role? Can that emotion define a person, do we lose control of ourselves because of it, or do we learn something more about ourselves? The green creature is presented as a metaphor and as an answer to all these questions – each of us has the Hulk in us, it’s just a matter of self-control and personal role whether we let him come to life or not. That is the universal goal of Benner, self-control, which is so difficult to achieve, unlike the additional anger that makes him even more unrestrained (and bigger).