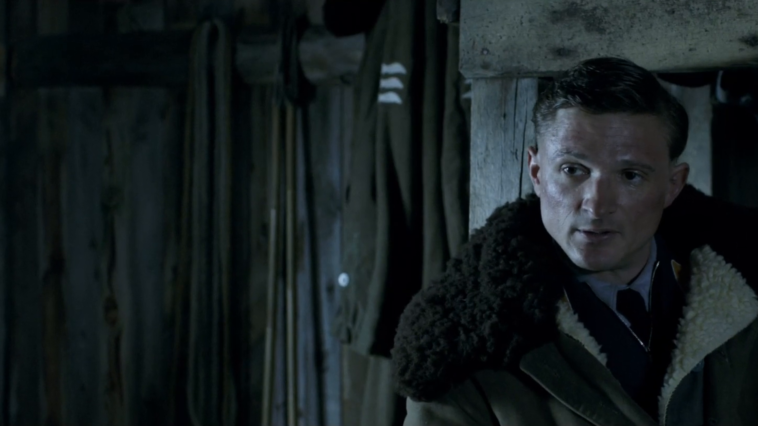 Talented Norwegian director Petter Næss made an anti-war film inspired by the true events that took place at the beginning of World War II, in April 1940. The script itself was created as a result of the joint work of the director and two of his associates (Ole Meldgard & Dave Mango). After an air battle over the Grotley mountain range in Norway, three German pilots from a destroyed Luftwaffe bomber and two British pilots from a damaged RAF fighter, unexpectedly meet in an abandoned log cabin. Initial intolerance will slowly be replaced by an instinctive urge to survive in the harsh environment of a snowy mountain. A group of five people becomes aware that only the united, without any conditions, with well-organized joint action, may have a chance to survive the harsh cold of the Norwegian mountains…

Regardless of the fact that the plot is set almost at the very beginning of the bloody war, it is still an anti-war narrative in terms of vocation. Here, the skilful director managed to portray the state of the human spirit in an unpretentious way in an unfamiliar environment and under dramatic circumstances. This drama best proved that even extreme circumstances, such as the whirlwind of war, can bring about something positive, even noble. Instead of ruthlessly killing the enemy, the humane character of all the protagonists comes to the fore, so that they manage to overcome all language and political barriers and become lifelong friends (which is pointed out at the very end of the film).

The acting is very appealing, because the combination of German and British actors proved to be the optimal solution, not only because of achieving the desired authenticity in the reconstruction of real events, but also because of the excellent interpretation of beautifully written characters. Of course, the choice of locations in Norway and Sweden also contributed to reviving the spirit of World War II, which Daniel Voldheim’s excellent camera skillfully transferred to the movie screen (an effective depiction of the cruel desires of the wild causes both admiration and unrest). If we add to that an interesting selection of music (the culmination is when everyone sings Over the rainbow), then we get a real audio-visual mood.

A well-set concept of the story with a finely done dramaturgical plot, with great humorous sequences imbued with sincere, spontaneous emotions that radiate positive energy, ultimately bring a pleasant experience to every film lover.

From all the above, it is easy to conclude that this is a very good film, with a strong message (peace brother), created in a co-production of Norwegian and Swedish cinemas. He surprised me a lot, even in the most positive sense, so I highly recommend him. One thing is for sure, if you give him a chance, he will not leave you indifferent.