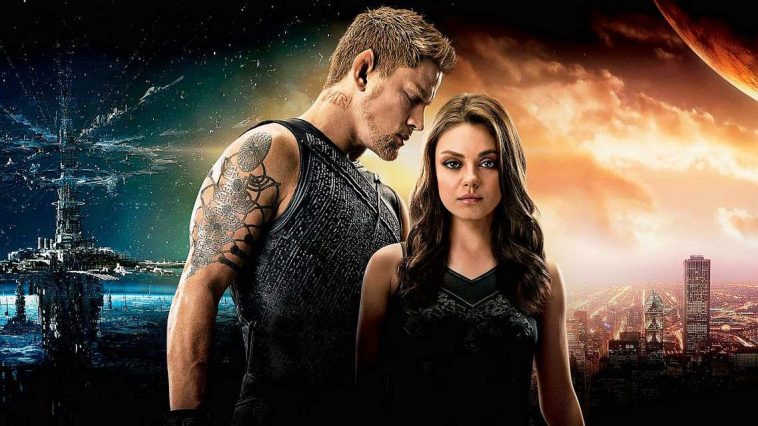 Lana Wachowski and Andy Wachowski gained worldwide fame with the trilogy The Matrix, which many believe is ahead of its time. Engaged primarily in writing science fiction, and then taking over the director’s baton, they became a respected name among fans of the genre, and their status was only further strengthened by the film Cloud Atlas. However, their latest project, despite strong expectations, did not manage to compete with the previously listed films in terms of quality, and I dare say that it is not worth the signature of these authors.

The main protagonist Jupiter Jones (Mila Kunis) is the daughter of a Russian immigrant who was born on an overseas ship. She has a great love for stars and planets in her genes, and she is destined for great things. The reality is different, she spends her youth as a housekeeper working in rich houses, and everything changes with the arrival of Kein Weiss (Channing Tatum), a former soldier who is a product of genetic engineering. He tells her that he is obliged to protect her because her genetic signature marks her as the next in line for inheritance, and that inheritance is to be taken over by three members of the Abraxus family, each with their own motives.

It is obvious that the Wachowski tandem has quite interesting and unique ideas that they tried to transfer to this project, but the script was too loosely written for those ideas to be more elaborate. It seems that they themselves did not know how to explain certain segments, or simply did not put enough effort, so it all seems messy and complicated. In previous projects, they were often criticized for numerous illogicalities, but there are so many of them in Jupiter Ascending that it is almost sad. It is simply incomprehensible to me that such names in the world of sci-fi sign a work that at some point becomes a parody of itself.

Jupiter Ascending 2 On the other hand, some critics believe that Wachowski inadvertently created a combination of sci-fi and comedy that should not be taken seriously. Even if it is true, and it makes sense for such comments because there are a solid number of targeted funny scenes, comparing it to e.g. Guardians of the Galaxy these comments become meaningless. The Guardians were made with that intention in mind as a sci-fi that will make the audience laugh and he does the job perfectly. On the other hand, Jupiter Ascending has certain characteristics of that film, but the problem is that we can’t take it seriously then. The general conclusion is that he cannot be classified as serious or comic sci-fi.

Visually, the film looks fantastic and it was really worth watching it in 3D. A lot of attention is paid to details and special effects, but the story simply does not manage to accompany that quality of production. For example, at the very beginning of the film, you will witness a ten-minute chase over the skies of Chicago and you will admire a fantastic visual experience, although the voice in your head will say ok, you chased a lot, how much more.

The casting, which is extremely unattractive, also supports this. Mila Kunis is simply not for a film like this and it is impossible to connect with her. Chaning Tatum repeats his characteristic role of a well-built macho guy, only this time he has skates that allow him to fly (?). Believe it or not, Sean Bean did not die at the end of the film, while fresh Oscar winner Eddie Redmayne in the role of Balex Abraxas showed that he should not act.