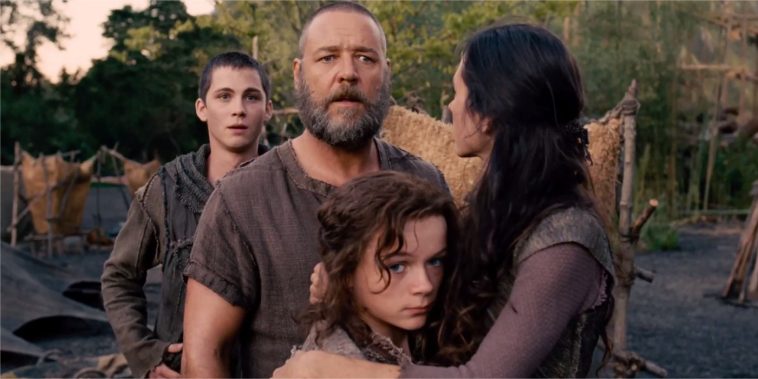 Director and screenwriter Darren Aronofsky has gained many fans, including the writer of these lines, with his specific projects in which he dealt in a minimalist way, with a small budget, a small number of characters, a lot of audio / visual effects and a perfect selection of music. topics that are interesting to most viewers. This time, he dedicated himself to the filming and realization of this biblical epic, which in itself has a lot of potential for work, but one gets the impression that the director has bitten more than he can swallow.

Everyone is probably familiar with the legend of Noah’s ark, except that Aronofsky provided it with additional details and characteristics in order to achieve a dramatic effect. According to his script, the human race is divided into two large groups depending on whether they continue Cainon or Abel’s lineage. The first are aggressive industrialists who are destroying the Earth for their own needs, while the second are peaceful vegetarians who live in seclusion and modesty. After the attack of one group, Noah, as one of the last people belonging to the peaceful group, received an apparition from the Creator, which he understands as a task to make a boat that will save all innocent beings before the great flood.

An important factor that will influence the general impression is, in addition to your knowledge of the biblical facts and the circumstances surrounding Noah’s Ark, the ability to adapt to additional events, characters and data that the screenwriter inserted to enhance the dramatic effect and interestingness of the film. Precisely because of these additions, the film met with numerous condemnations from radical religious groups, while in some countries it was banned, such as Qatar and the United Arab Emirates. I will only mention the huge giants who represent the fallen angels whose purpose is to protect the human race, as well as the industrial boom in such an early age of human history.

Daren Aronofski is a talented filmmaker whose quality is best reflected in smaller projects that do not require a lot of money. This time, he was entrusted with an unlimited budget and the impression is that this is definitely too much for him and that he is somehow above the blockbuster, it is simply not his specialty and it is a waste of talent. Also, the script he wrote is quite good, with a lot of religious and motivational sentences and dialogue, but everything is somehow too much. One gets the impression that the screenwriter wanted to say and show so much that everything turned out to be overcrowded and unnecessarily overemphasized.

It must be admitted that interpreting this classic story in Darren’s way is interesting and innovative, but critics find numerous illogicalities and inconsistencies. The first great illogicality is the character of Noah himself, who is presented as a descendant of the peaceful Abel with a life philosophy of respect for man, while in certain situations he behaves much more like a violent industrialist. According to the Bible, his family was chosen for survival because of their great love and faith in God, while here in a way they represent servants, and the important thing is that the first descendants of Noah come on the boat with their family, while here the search for women is one of them. more important subplots.

From a technical point of view, the film looks quite good. Weaker CGI is noticeable in some scenes, but this is negligible. The camera’s performance is more than good, with combinations of all shooting methods from Darren’s previous projects. The sound is great, with a great soundtrack.

Acting is one of the highlights of the film. Oscar winners Russell Crowe as Noah and Jennifer Connelly as his wife Name provide great, steady and compelling performances with a lot of emotion and it was really interesting to watch their transformations and facial expressions. A comic addition to the film is provided by the always welcome Anthony Hopkins in the role of Methuselah, while the tandem Emma Watson-Logan Lerman frustrates her acting much more than the viewer enjoys it.

This film is another proof that a large budget, as a rule, cannot be a standard of success, even if it was entrusted to a quality and talented film worker such as Darren Aronofsky. I’m a big fan of his, but he just failed to impress me. Visually convincing, with good acting and an interesting script, but with a lot of incoherence, confusion and too long a duration to fully enjoy it.