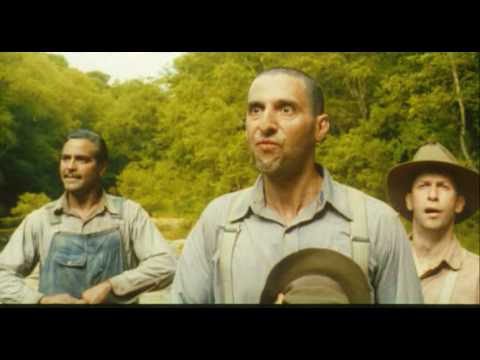 Brothers Joel Coen and Ethan Coen are respected filmmakers whose wacky, highly stylized and detailed films have gained cult status. This time, they dedicated themselves to the adaptation of Homer’s “Odyssey”, whose shop they placed in the conservative south of the USA, in the middle of the thirties of the last century.

The film opens with a prison farm from which a trio of strange prisoners named Everett, Pete and Delmar escape. They are not escaping from prison in order to finally be released, but solely because Everett is hiding a larger amount of money that he hid before his arrest. While searching for money, the trio experiences a series of interesting adventures and meets a lot of people, including a bible seller, a blind man who owns a radio station, a bank robber with a “baby face” and a singer who sold his soul to the devil. Due to the circumstances, the trio becomes an important link in the local political elections, while the sheriff and his team are constantly on their heels.

The Coen brothers masterfully connect ancient films with modern cinematography. This film can rightly be placed with the classics that came out in the thirties of the last century, which were a combination of comedy, crime, drama and musical. One gets the impression that they gave themselves too much air and indulged in experimentation, so the project has great scenes, photography and directing, but also a few relatively weak and almost meaningless scenes. On the other hand, the project enriches the perfect soundtrack, which is a mixture of gospel, jazz and blues. Great acting completely follows what the screenwriters imagined and creates an authentic feeling and impression.

The film is led by the charismatic George Clooney, who with this film, and later with the project The Men Who Stare at Goats, gains the affection of fans of independent film. He is accompanied by the genius actors and favorites of director John Turturro, who shows another authentic and original performance, and John Goodman in a very interesting role of a Bible seller. It is also worth mentioning Tim Blake Nelson, a great friend of the Cohen brothers, and Holly Hunter, who played the role of Evert’s insufficiently characterized wife.

This is not the best film for a directorial duo, but it has all the qualities to be. A different atmosphere, great acting, interesting, Oscar-nominated script and masterful directing create great entertainment that, despite a few illogicalities and meaningless scenes, will remain in your fond memories.