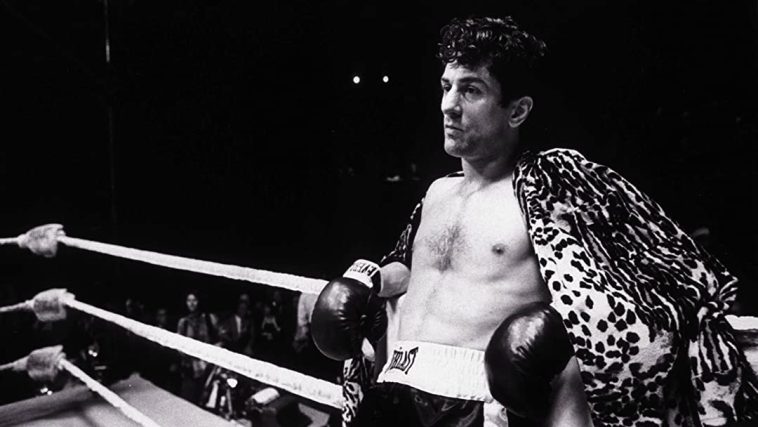 In 1976, director Martin Scorsese teamed up with Robert De Niro and screenwriter Paul Schroeder to make one of his best films, Taxi Driver. That year, this film, which deals with a complex psychotic character, lost in the Oscar race to Stallone and his Rocky, so Scorsese decides to have fun with a thematically similar character who, he said, will make Rocky’s character look like a cartoon character. versus his Jake la Motte, a historical figure and famous boxer.

Jake la Mota (de Niro) is a raging bull who dominates the ring during the 40’s, beating his opponents with his unstoppable blows. Although he lost several fights, he could not allow himself to sink. His brother Joe Pesci is his sparring partner and they have a very close relationship. Joey has connections with the mob, but Jake refuses to deal with it and wants to fight for everything himself. The years go by, Jake fights great, but his title escapes because he refuses to work with the mafia. While his professional career is beginning to stagnate, in his private life his jealousy and paranoia create problems for him when he sees his wife in the company of other men.

Despite channeling his anger in the ring over time, he increasingly escalates out of the ring, attacking his wife and brother, so that what was his inspiration and motivation on the way to the title of champion became the main driver of his downfall. The script deals with Jake’s self-destructive behavior in the unpleasant world of boxing, his complex feelings and awareness of guilt, egocentrism and extremely violent temperament, which is “charged” every time he is beaten in the ring. Jake becomes a kind of antihero from a hero.

From a sports film that deals with boxing, Scorsese made a top psychological study of boxing and one of the best boxing films of all time, and it can be freely said that the main factor in that success is the top acting of Robert de Niro. La Mota is not a very nice character and his anger and jealous outbursts led him to the final fall, but somehow there is something about him that creates sympathy and enchants, which de Niro masterfully evoked. In general, the film explores the mind of an emotionally disturbed person with whom we do not want to deal, but the film simply draws us into his mind and absorbs us.

The boxing scenes are violent and bloody, hard to watch, with an extremely close-up of dripping blood from a rope in the ring to show the transmitted violence as much as possible, but what is more surprising is the main actor’s ability to convey anger and paranoia outside the ring. this would not be “just” a boxing movie. This is supported by a kind of psychological research in his relationships with his brother and, especially, his wife and the opposite sex in general. The black-and-white cinematography is really impressive and a hit, and Scorsese opted for that variant in order to be different from Rocky, but also because he didn’t want to have so much blood on the screen.

It is less known that Scorsese had problems and a kind of personal demons in those years due to the fight against drug addiction, so there is a parallel in that sense with the main character who has his personal demons. The question is whether Scorsese would have made films today if this project had failed. The main initiator of everything was de Niro, who primarily intended to stand behind the camera and direct, and it is good that he did not do that. He continues with his powerful performances from that time, and he is greatly supported by Joe Pesci. The chemistry between the two is so evident that they simply shine on the screen and that is why they will often work together in Scorsese films in their future careers, while the two of them are still close friends. As part of the preparations for the film, De Niro fought in three boxing matches, gained over 25 kilograms, trained with the real La Motto, and even broke the rib of the unfortunate Pesci during the filming because he could not control his strength.

Raging Bull is an art / sports film that deals with the psychological study of boxers as athletes, as businessmen and as personalities and is considered by many to be the best film of the 1980s. A kind of masterpiece with an exceptional performance by Robert de Niro, who was definitely the best actor in that time period.