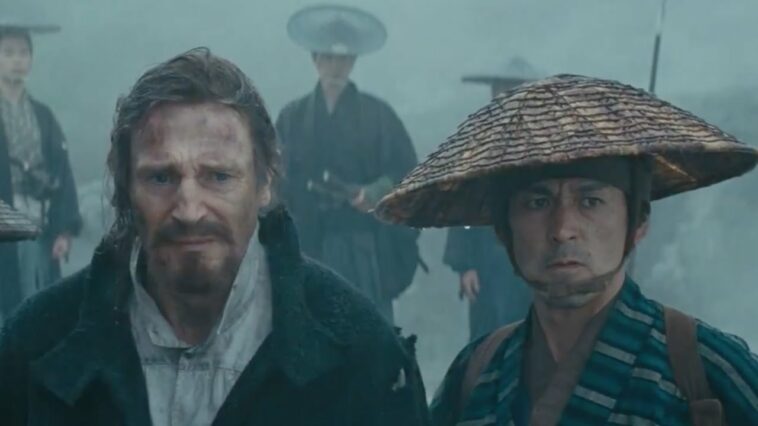 News arrives at a Catholic college in Macau that Father Ferreira (Liam Neeson), who was sent to Japan fifteen years ago to spread Catholicism, has renounced his faith and is living as a Japanese man. His students Sebastiao Rodriguez (Andrew Garfield) and Francisco Garupe (Adam Driver) insist on searching for him, in order to save his soul. With the help of Kichihiro (Yôsuke Kubozuka), an alcoholic fisherman, they come to Japan. There, Christianity is on the black list of shoguns who send samurai-inquisitors to find hidden Christians. The arrival of a priest in a small village pleases the inhabitants who secretly profess Catholicism, but with them come troubles in the form of an inquisitor’s visit.

One of the most impressive scenes takes place right when the priest arrives in a small village, and that scene ferries all the further events in the film. In it, the priests, who are quite exhausted and hungry after a long journey, receive food from the locals. After the first bite, the two of them understand what the residents do before eating – they pray and bless the meal. Food was so tempting for the priests that what was a reflex reaction to them, under these circumstances, was not even on their minds. Their need to eat was completely hampered by the thought of prayer. This conflict between the physical and the spiritual is one of the basic settings of this film.

Silence is the second film adaptation of Shusaku End’s novel, the first was shot by Masahiro Shinoda in 1971. Mr. Scorsese planned to record it in the early 1990s, but he constantly postponed the decision, primarily due to obligations to producers and the fact that he was constantly correcting the script written in collaboration with Jay Cox. Set in the first half of the seventeenth century, events describe the consequences of the decision of the Japanese shoguns to expel Christianity from their territories. They are of the opinion that violent methods of torture and murder can force Christians to renounce their faith, unaware that for Christians torture is the final test of faith, which they go to almost, so voluntarily.

The story is simple and straightforward – a tandem of priests goes in search of Father Ferreira, hides from the Inquisition, participates in rituals with the villagers, while their faith is tested in different ways all the time. After the arrival of the Inquisitor, a conflict arose between religious devotion and literal survival. Rodriguez chooses a pragmatic approach and advises believers to step on the icon of Jesus in front of soldiers to show that they are not Christians, while Garupe is against it – our faith has rules, and those rules are the reason why we are here today. During the film, there is a justified suspicion that the Japanese do not fully understand Christianity, as the samurai themselves argue, while Rodriguez’s commitment to the faith is important, not its finesse.

In the final third of the film, Rodriguez’s faith comes to the greatest temptations, when he must renounce his beliefs in order to save those who have already renounced them. Scorsese masterfully presented the internal conflict of an individual when his faith passes the final test, but not under the question of his life and death. What, conditionally speaking, should be a simple decision – is not. Due to the dose of selfishness (compare yourself with Jesus), it is concluded that his faith is somehow more important to him than the faith of his followers, and due to the fact that his own death is not an option, he tries unsuccessfully to find greater meaning than his faith.

As far as the visual impression is concerned, everything is in the service of the story to the maximum, with the goal of achieving a meditative experience with the viewer. Each frame is simply beautiful, with a lot of long scenes, no sudden pops and a lot of fluid editing (some would say monotonous). Taiwan’s landscapes were a great location to represent medieval Japan, and some filming solutions rely on Kenji Mizoguchi’s classic Japanese films such as Gyon Bayashi or Sansho the Bailiff, or Yasuzira Ozu, the author of the tatami shot, who also uses Scorsese. There are a few scenes that will upset you a lot, although you won’t see a single drop of blood.