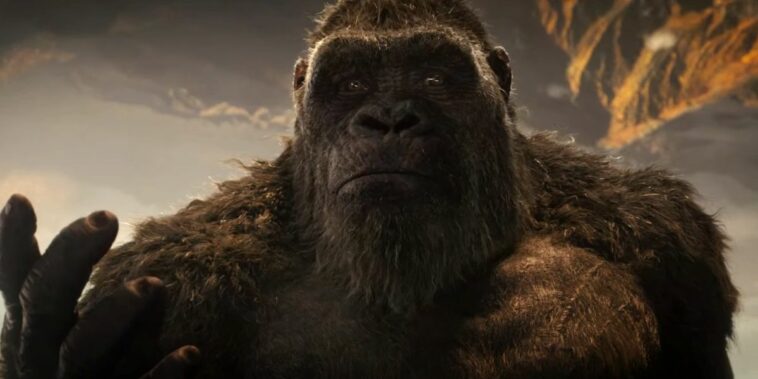 Kong: Skull Island is part of the so-called Legendary’s MonsterVerse i.e. a film universe designed to have four films. The first was Godzilla from 2014, the second is Kong: Skull Island, followed by Godzilla: King of the Monsters (2019) and Godzilla vs. Kong (2020). Anyway, I’m glad that all this is happening and, regardless of certain objections that I had with Godzilla, Kong: Skull Island prepared a real exotic monster cinema party for me.

The film begins in 1944, when two planes, an American and a Japanese, after a baptism of fire in the air, fall on an island in the middle of the Pacific. Both pilots survive and continue to fight on the ground. In the ecstasy of battle, they suddenly feel the earth shaking, and a gorilla the size of a small skyscraper emerges in front of them. The story takes us further to the very end of the Vietnam War. The troops are preparing to return to the United States, including a helicopter unit under the command of Colonel Packard (Samuel L. Jackson). The day before leaving, the colonel was given the last task – to take a team of scientists to the newly discovered island, which no one has set foot on yet, and they need to provide security. The scientists are joined by the team of Monarch, a secret organization, which also engages its own protection in the character of James Conard (Tom Hiddleston), a former SAS member. The team gathered and headed towards the island and everything looks great, until the first bombs fall and they wake up the king with their bang…

Kong: Skull Island is a real exotic adventure that has everything that such a film should have. Exotic locations of amazing nature, inhabited by amazing creatures. Come on, they are amazing, but 99% of them want to have you for dinner in various ways. The characters are different, bringing with that difference the necessary fun and liveliness, which one adventure must have. The story is sufficiently drinkable and mysterious, but not too difficult, it allows you to easily follow the action, and at the same time you can absorb every atom of audio-knot exoticism that attacks your senses.

The visual effects are amazing and I must say that I am completely delighted with how the film was made in that sense. Definitely something unseen and worth watching a movie in the cinema just for that reason. What needs to be added to the formula is the music, which is absolutely to my taste, with some of the best hits of the rock of the seventies. In the end, such a show requires a major attraction, and we get it with the undisputed King of the Congo. An extra bonus in the whole ride are the other contenders for the title of king or the main attraction. After two hours of this movie ride, you have to leave the cinema satisfied, with a smile on your face.

The director is Jordan Vogt-Roberts, completely anonymous to me, but that did not stop him from doing a great job and making an adventure film for new generations, that is. to set the standard for how such films should be made. How satisfied I am with his work will be best told by my enthusiasm for the fact that he will make a film adaptation of one of my favorite video games, Metal Gear Solid. Roberts certainly had a lot of help from Dan Gilroy who wrote the screenplay. Dan has an impressive filmography. In addition to writing the screenplay for the films Real Steel, Born Legacy, Nightcrawler (the latter also directed). Their cooperation in the Congo was more than successful.

A lot of attention was paid to everything so that this film would be a success and replace perhaps not so good reviews for Godzilla. In addition to the technical side of the film, which is flawless, attention is paid to the story itself, as well as the characters. We did not go for the option to terrorize us with special effects, and leave the story at the kindergarten level. It was, I would say, the old school variant. A real exotic adventure in the manners of Indiana Jones, with the difference that here in the foreground is a monster, not a hero. In such a setting of the film, you have many quality elements, which are mixed in an ideal ratio, so that the final product becomes a real cinema hit, and thus acceptable to a wide audience, from those demanding to those who came to kill two hours. When you see that viewers, at least most of them, come out of the cinema satisfied, you know that the film has become a hit.

The story is interesting, just like the characters who carry it. You can connect with more of them during the film, choose your favorites and cheer for them to survive. The only problem is that more of them will become your favorite during the movie, so you will find yourself in trouble. This is due to the well-written script and characters, but also to the extraordinary acting team that is gathered here. Tom Hiddleston, Samuel L. Jackson, John Goodman, Brie Larson, John C. Reilly, etc.