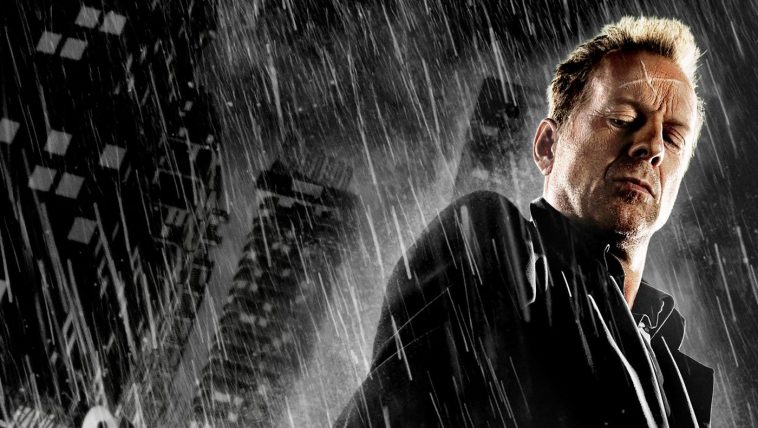 I watched a lot of movies based on comics or comic book adaptations – some better, some worse, and for the first time I watched a movie made as a comic. The villains say that this film can be great for most or only those people who have read comics and who are familiar with the work of Frank Miller, but I am an obvious proof that this is by no means true. I sign that in this case it has nothing to do with it, the film literally knocked me off my feet, and I found out about the comic and about Miller only after watching the film.

This film is actually an adaptation of four crime stories taken from the popular comic by Frank Miller. The action takes place in a corrupt city where lawlessness reigns. First we have a story that revolves around the rough and strong Marv (Mickey Rourke), a half-man looking for the person responsible for the death of the woman he spent a wonderful night with, the prostitute Goldie (Jaime King). Corrupt police knock on his door to blame him for her death, he runs away and takes matters into his own hands. In that story, it is also important to point out the great character of Kevin, played by Elijah Wood. A silent, efficient killer, behind whose cold look behind his glasses, and at the same time a sickly optimistic smile, hides a great mystery.

Another story follows part of the so-called Sin City. The old town and the prostitutes who rule in it. When former photographer Clive Owen gets involved with the beautiful bartender Shelley (Brittany Murphy) and gets hooked with her ex-violent boyfriend Raferti (Benicio Del Toro) in a chase, he drags him to the Old Town where prostitutes led by the sensual Gale (Rosario Dawson) rule. The third story follows an elderly police officer Hardigan (Bruce Willis) who risks his life to save the girl Nancy from the deformed and deviant pedophile Rork Junior (Nick Stahl) who is the senator’s son. Adult Nancy plays the beautiful Jessica Alba. We also have this story at the beginning of the film, and it’s all rounded off by a link about an unnamed professional killer (Josh Hartnett) who simply kills for money – he appears both at the beginning of the film and at the end.

With its interestingly set story, comically visually trimmed in black and white, the “blue screen” technique (the film was made in front of a blue screen with minimal film equipment) and the tone of famous actors, the film could not fail. Even when we add the names of Robert Rodriguez, Quentin Tarantino and the creator Frank Miller himself – a treat! I must mention that until his collaboration with Rodriguez, Miller exclusively refused to have his comics screened, probably out of fear that it would not be credibly transmitted, and that is why he largely participated in all segments of the creation of this film. Until recently, I viewed Robert Rodriguez as a lukewarm Tarantino wannabe, but I was grossly mistaken. He only learns and absorbs from a master like Quentin, and so far he has made, among others, films: Desperado (1995), Once Upon a Time in Mexico (2003), Machete (2010), Planet Terror (2008), but Son City in my humble opinion is his best achievement that will surely be remembered in film history because it is a kind of masterpiece.

The visualization of the project is the strongest argument of this film, because there is no color, except for e.g. the occasional red that appears to accentuate one’s lips or some part of the body, and the light yellow that actually represents blood. Also, the blue eyes of the prostitute played by Alexis Bledel are very effective, they symbolize cold because in the end she is the one who betrays, as well as the green-yellow eyes of the villain, played by the late Michael Clarke Duncan.

I have already said a few sentences about the actors, but I will highlight the ones that left the strongest impression on me. Marv, played by veteran Mickey Rourke, the best-done character in the film, everything related to him is perfectly elaborated, and supported by his great acting performance plus a very powerful voice that dominates – a hit. Then I will single out the great supporting Kevin, a mysterious character played by Elijah Wood. Your blood literally freezes in your veins when you look at the pronounced contrast of his gaze. Rosario Dawson and her prostitute character, which is more or less elaborate, while the character of Dwight, played by Clive Owen, is very poorly performed, so this actor could not shine as he usually knows. I will also mention the only hardcore good guy, Officer Hardigan, somewhat clichéd, but in a good way, the way we like and support him to be.

You don’t have to know who Frank Miller is, you don’t have to read the comics, specifically this comic based on the film, you don’t have to be a fan of Rogriges or Tarantino, or any highlighted actor from the film. It is enough to watch this film with firmly open eyes and an even more open mind in which there is still room for imagination and creativity.