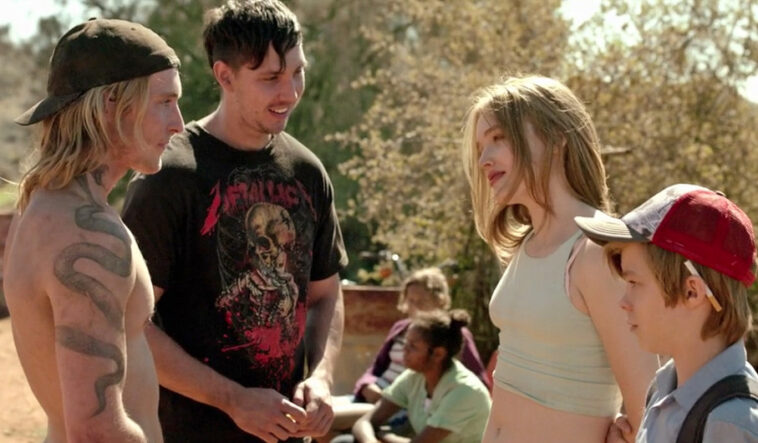 The store is located in Natgara, tucked away in the Australian wilderness in the middle of summer with record heat. Here we see the married couple Catherine and Matthew Parker and their two children Tom and Lily. At first glance, it is clear to you that not everything is going well. The family came here recently from a larger city, the reasons are unknown, except for the barely noticeable information that their arrival has something to do with their 15-year-old daughter. Suddenly, both of their children disappear, chaos begins, and everything that is buried deep will come to the surface.

I have to say I was looking forward to this movie. First, as I mentioned, it is an Australian film and has a great cast. Secondly, from the first shot, it is clear that Strangerland is in indie style, in terms of shots, color, music and overall atmosphere. So I got ready for a movie night like this and I have to say I wasn’t disappointed.

The film is slow-moving, things are slowly unfolding in a way that keeps you interested all the time and in constant questioning and guessing, what happened, why, who is to blame. Here, I must say that the length of the film itself will be an obstacle for some, because it takes almost two hours at a slow pace. However, everything has its reasons, at least for me and for my understanding of this film. The atmosphere is perhaps the most important here, in the sense that everything is subordinated to the same. All segments of the film are made to fully reflect the imagined atmosphere and transmit it to the viewer so that he can easily feel it on his skin.

The action takes place in times of great heat, the earth is scorched, everything is slowed down and reduced to the simplest processes, reluctantly and waiting for the rain. Sandstorms occasionally come and take away the last remnants of good mood, and again only apathy and depression remain. The environment is cruel, hot, desolate, painted in reddish earth and everything melted into the impersonality of heat. The town is dirty with worn out buildings, cars and people. This whole collage of depression is sounded with melancholic and slow tones of music that only reinforces the given impression.

The photo is beautiful and awesome. The grandiose shots of the Australian wilderness, canyons, sand, wilderness and fantastic twilight and dawn are at the same time wonderful and scary because they depict the reality in which our characters find themselves, and that is loneliness and a desolate world. It is in this kind of ambience and atmosphere that the difficult story of the family, community and human relations within them is placed. As I said, with good reason, because the whole ambience is an extremely painted mental state of the actors of our story and their interaction.

Our heroes will go through slow, difficult, gloomy, physically and mentally difficult sobriety. It will collide with reality, but that collision will be like a slow motion shot that will move frame by frame and go through a new horror with everyone with enough time for that horror to be truly felt. He will face his past, all his actions from it, and then the consequences of those actions. That confrontation will not be easy, because the most difficult thing is to face yourself and admit your own mistakes. Whether they will succeed in all this and whether that eventual success will be rewarded, I leave it to you.