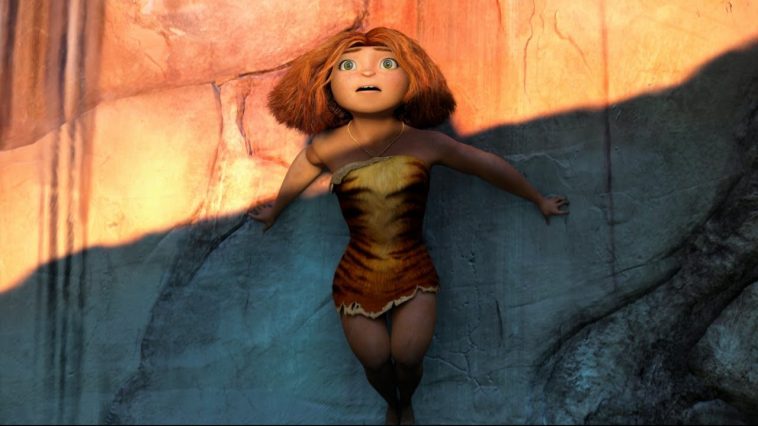 The animated film “The Croods” is another party for the whole family, in the true sense of the word. Many will say that cartoons are not what they used to be, nostalgically remembering those they watched as children. However, it seems to us that the situation is just the opposite. The cartoons we watched as children seem to lose the charm by which we remember them in the segments of our childhood memories, after watching them again now as adults. In fact, it seems to us that cartoons have become better and more universal in recent decades, in terms of content accessibility to almost all generations. This project is one of them, and if you watch it with your child, you will certainly not be bored, even if you watch it alone or in the company of adults.

The story is set in an unidentified period of history, which seems to most closely represent some kind of prehistory. Also, the cartoon is full of unknown animal species that are obviously not based on reality, but mostly on imagination. So you will e.g. in this cartoon you will see some kind of elephant with giraffe patterns, as well as miniature elephants or various species of birds that we are pretty sure did not exist in any period of earth’s history. However, this is a cartoon and as it is customary to say, anything is possible in it. What we are actually aiming for is that many cartoons, such as the animated film series “Ice Age”, are not only entertaining, but also slightly educational for children. Thus, children with the cartoon Ice Age can, for example. learn what a mammoth or saber-toothed tiger looks like, which is not the case with The Croods, but it still doesn’t make it much less valuable than others, at least for that matter.

The center of events in this cartoon is the six-member Crood family. This family lives in a very inhospitable rocky environment, with very scarce feeding opportunities. Also, their environment is at the same time full of various predators, due to which the lives of this family are in uncertainty every day. In order to avoid all these dangers, the Croods s usually hide in a cave, which gives them a sense of security and in which they spend most of their lives. Sudden cataclysmic changes in their living environment, however, force them to leave their habitat, forcing them to look for a better place to live.

During their travels, the Croods also come across a young man, who is a little more sophisticated and resourceful in nature than them. A young man who responds to the one-syllable name Gay (boy) joins them in an adventure, teaching them along the way how to use their brains a bit, which they are not particularly used to. Perhaps the biggest objection to this cartoon is the very unoriginal and not particularly logical ideas that Gay, and later Grug Crood, otherwise the head of the family, come up with. Namely, their ideas that solve a problem are freely stupid, but at the same time they are presented in the cartoon as very clear and ingenious, which is a bit irritating, and not particularly constructive.

The voices of the main characters were lent by Nicolas Cage, Emma Stone, Catherine Keener and Ryan Reynolds, which is a pretty good team, and it can be said that the job is well done.

In the introduction, we have already mentioned that it seems to us that animated films are getting better every year. However, it may be that people have simply become or remained older children than they once were after growing up. Namely, watching cartoons used to be, not so long ago, a “privilege” mostly only for children, while adults did not pay so much attention to them. Things are obviously changing, aren’t they?