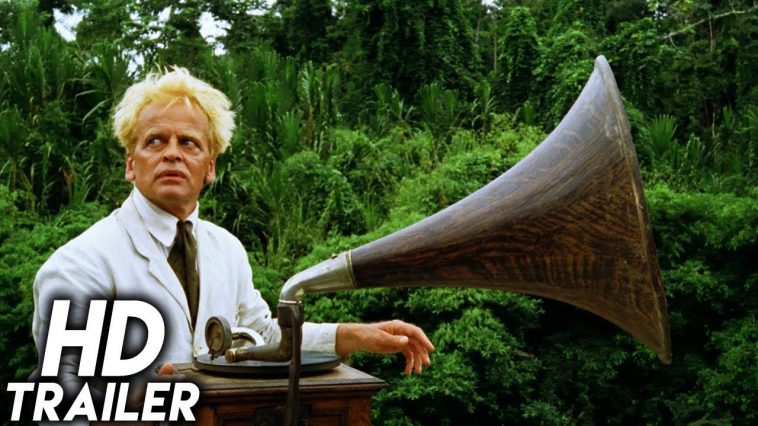 This movie is so big that I have to write one “big” review. I wonder how many directors exist that they dared to do something like the German director, actor and screenwriter Werner Herzog did? Certainly not much.

Fitzcaraldo from 1982 is, along with Aguirre – Wrath of God, the most famous film by Werner Herzog. Herzog is otherwise known, in addition to these films, for his biographical and documentary films, as well as for his collaboration with Klaus Kinski. There are many well-known partnerships between directors and actors (Martin Scorsese and Robert De Niro who made nine films together or Tim Burton and Johnny Depp who made seven films together), one such partnership was with Herzog with Kinski, so this is their fourth collaboration (five years later another in Cobra Verde will follow).

Brian Sweeney Fitzgerald (Klaus Kinski) loves operas and is obsessed with the idea of ​​making one in the middle of the jungle, it’s his dream. Fitzgerald is known in the jungle as Fitzcarraldo, because his real name is too difficult to pronounce for people who also live in the jungle. He lacks money for his dream and he decides to work in rubber, like all businessmen in the jungle. However, all the forests in the jungle are already occupied, the only place that is not yet occupied is on the other side of the jungle, across the other river. The reason it is not occupied yet is that one hill separates those two rivers and it is impossible to cross the hill by boat, and besides that there live Indians who do not like foreigners. It all seems impossible to get there, but frustrated by his idea, Fitzcarraldo does not give up on his dream and persuades his mistress (Claudia Cardinale) to give him money to buy a boat. After picking up enough people to ship his amazing adventure begins.

The first choice for the main actor was Jason Robards, with whom his friend would always be in the film, played by the Rolling Stones legend Mick Jagger. The three of them had already shot 40% of the film together, but suddenly Jason fell ill and had to return home, where a doctor forbade him to return to the jungle and continue with the film. A big blow for Herzog, but things get worse when Mick Jagger has to leave the film set due to signed contracts for a new album and a Stones tour. For Herzog, this becomes a big problem because, in his opinion, no one can replace Jagger, and he thinks that his biggest failure in his career is that he failed to make a film with him. A little later, despite all the problems, Herzog hires Kinski, who is well known to him, and thus begins their fourth collaboration. I looked up from the stage with Mick and Jason and I think Kinski is much better than the two of them.

Kinski, even though you don’t seem to know him, is guaranteed to have been seen in at least one of his films. The great Sergio Leone hired him in 1965 for “For a Few Dollars More”, in a film where Kinski will hook up with Lee Van Cliff. Kinski is a big egocentric and often has outbursts because of it. He is a great actor and a great professional, and in Germany, people who have never seen any of his films love him because of such outbursts. Herzog and Kinski are known as friends and enemies, so Herzog made a documentary called “My Favorite Enemy” in which he explains the relationship between the two and says that Kinski, if not in the spotlight, suddenly explodes and then an hour and a half or the Duke or anyone else from the film crew swears and shouts at him.

The Indians who took part in the film told Herzog that they were scared, but not of Kinski (they saw him as a fool to be solved), but because of Herzog, because he was just silent all the time. They even offered to kill Kinski for him, but Herzog, of course, refused. Ficcarald’s mistress Molly was played by the top and beautiful Italian actress Claudia Cardinale, who a few years after Kinski also had the honor of collaborating with the great Sergio Leone in “Once Upon a Time in the West”. Of course, she did a great job, although the role was not too demanding.

Although the film, in addition to the genres of adventure and drama, has the characteristics of a biography, Herzog did not take too much from the real story. He got the idea for the film from a rubber baron named Carlos Fermín Fitzcarrald. Carlos was not interested in opera at all, nor did he ever bring Enrico Caruso (Italian opera singer) to the jungle, he only went to collect as much rubber as possible and get rich. However, it is true that he had to cross the hill by boat, but it took much longer than shown in the film and the Indians did not help by themselves, but he forced them and the number of victims is also much higher than shown in the film. The ship had to be halved to make it happen, while the director used a bulldozer.