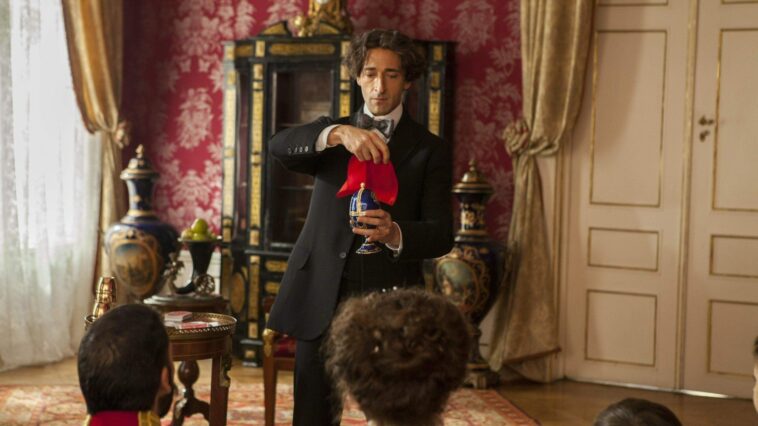 Harry Houdini is probably the most famous and greatest illusionist who has ever lived. He gained fame at the beginning of the twentieth century with his tricks of liberation from incredible situations, such as chains, locked prison cells or tanks filled with water. I knew absolutely nothing about his life, so I was delighted with the project of the production company History, which made this biographical drama in the form of a two-part mini-series that deals with his life.

The authors of this project decided to have full fun with his life, so that I had an insight into the most important events and situations that marked Houdini’s life and career. The narrative is not linear, so years often intertwine. We see his childhood, relationships with his parents, guilt that his father does not believe in him, as well as the sincere support of his mother. As the film progresses, we will meet the beginnings of his career, his wife, quick success and all that success brings.

The screenplay was written by Nicholas Meyer based on the 1976 book Houdini: A Mind in Chains: A Psychoanalytical Portrait by his father Bernard Meyer. The book was not typically biographical, but rather dealt with the analysis of Houdini himself. That is why all events are viewed under some kind of prism of his psyche, how each event influenced his personality, attitudes and thoughts. We have an insight into this through the narration that accompanies the entire film / series. I understand narration as a way for lazy viewers to easily connect with what they see and as additional explanations of certain scenes, but personally I am not a fan of it because it does not leave much space for the viewer to come to terms with what he sees. It just seems to create the impression of watching a documentary about his life, not a feature film / series.

Personally, I enjoyed the film thinking that everything that happens is really from the life of Harry Houdini, but I was surprised by the amount of fictional scenes, or scenes that were modified to further evoke the mystery, sensitivity or instability of our protagonist. It is normal to expect that the project is not 100% true, but it is also normal to expect that after watching you do not have to google what is true and what is not, in order to create an opinion about that person or the film itself. Somehow, between the project that glorifies Houdini and the project that deals with his psychoanalysis, Houdini remained somewhere in between, vague in both senses.

What they also reject are some technical solutions that somehow do not go with the biopic that was located at the end of the nineteenth and the beginning of the twentieth century. In my opinion, there is too much CGI (belly scenes are unnecessary), some of the director’s ideas are bad (tensioning with fast camera work, lack of showing emotions in scenes full of them, showing the mother in other women) and choosing music not exactly the best (industrial rock or whatever).

All of the above applies if you expected a classic biographical drama from the Houdini project. On the other hand, if you are looking for something with an interesting story and characters that will entertain you, then this is the right choice for you. The amount of information, dialogue, events and quick changes of years will make you watch the screen with great attention all the time. There is no idleness and the characters are interesting, although they are not fully developed. The acting is really great, above all the duo of Adrien Brody and Kristen Connolly really did their best. History, for its part, provided the maximum and built numerous sets in Budapest (all scenes were filmed there). Also, fans of tricks will see almost all those who celebrated Houdini, again with the addition of (unnecessary) CGI.

The general impression is that the authors wanted to put too many things in a project that lasts almost four hours. Harry Houdini’s life was simply such that there were events and facts that could be told throughout the season, and thus the screenwriter’s solutions would be better, the characters would be more elaborate, and possibly bad technical solutions would be avoided. This way, Houdini can serve as great fun if you don’t need to deal too much with historical facts or technical-script solutions.