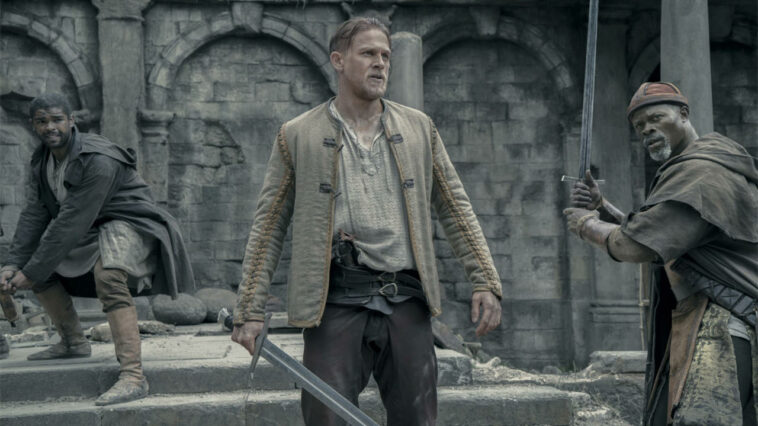 It was the time when England was ruled by Uther Pendragon (Eric Bana). A time when there was a conflict between people and wizards, who lived together until then. Uther’s brother Vortigern (Jude Law) ruthlessly persecuted and killed wizards. Then the wizard Mordred raised a large army and attacked Uther and his castle Camelot. Mordred raises large beasts with magic. And Camelot would be about to fall. Al Uther raised his sword, donated by the wizard Merlin, and defeated Mordred. That same night, magic gave birth to another monster, the sword fell into the icy water, and the river took one boy far, all the way to the shores of the big city. And then the Legend of the Sword begins…

As I said, there are various versions of the old legend, various attempts to emphasize just that, and so is this one. This time, the Legend of the Sword is brought to us by Guy Ritchie in his own way. Guy has a special style and has nurtured it from the very beginning through most of his films. Although genre-wise different, all of his films have that recognizable flair, and it is primarily based on the street philosophy of London’s streets. That street style and jargon started with the films Two Soot Double-barreled and Snech, and later through Revolver and Rock and Roll, all the way to the great endeavor and the new version of Sherlock Holmes. Quick dialogues, tricks, scams, street geniuses smeared in a thousand colors, which will turn you on in the blink of an eye.

Most of his heroes are like that. Rebels from the street, sharp-minded, problematic, but correct at heart. He also showed in Sherlock Holmes that he does not deviate from his own. He hired Robert Downey (another problematic one) and brought us the hitherto unseen Sherlock, who is not a stiff gentleman, trimmed on the edge of obsessive-compulsive. No, his Sherlock, like all his street heroes, is problematic, quarrelsome, deceitful, fickle, but with a genius mind and a pure heart. Sherlock who is part of that street universe of London, when he knows it to the core.

It was no surprise in his latest film, although it is a famous epic legend, to recognize his style and see his street version of King Arthur. Yes, he placed our great hero, from an early age, on the streets of London, where he grew up with countless challenges, became a street hero or a great ruler of a small world. Troubled, brawler, deceiver, fickle, but again with a sharp mind and a pure heart. Such are his companions, and such are his enemies and future allies. All but that great ultimate enemy, when he still doesn’t know he has to defeat.

Not everyone may agree with this presentation of the legend. It has certain omissions or, better said, things that have been neglected to the detriment of the main story. The characters who make up this story are numerous, so some of them didn’t get enough time. Some motives remained unclear or, better said, failed to be fully revealed. Some important places, worlds and characters remained in the viewers’ imagination and we didn’t learn much about them. Some passions did not flare up. However, did Guy make a cinema hit in which you will enjoy a great adventure for two full hours? I can say for sure that it is. The first weekend at the box office did not go well, and evil tongues are already announcing the failure of the year, given the 175 million heavy budget. The critics were not generous, but the audience is quite satisfied, and that if you ask me is the only thing that matters.

The new Arthur is uncharacteristic of his legend. Like I said, all of Richie’s style and Charlie Hannam did well in that role. This is not surprising, because he played a similar knight in Sons of Anarchy for years, only on a motorcycle. His Arthur grew up on the street, but from an early age, thanks to his intelligence and the destiny foreseen for him, he learned from every mistake and did not repeat it. He quickly managed to be the ruler of a small world, on the shores of which he was thrown by a small boat. Growing up is one of the most impressive parts of Gay’s story. It may have some flaws and is not exactly a bonding material of the highest quality type, but it really has parts that leave you breathless, both in image, melody and the way they are combined.

In the further development of the story, a plethora of currently the best British actors, which we have seen in numerous series and films in recent years, enters the scene. Their great performances are certainly perhaps the strongest asset of this film. It is not known who is better. From small to big roles, everyone uses their seconds to the best of their ability. There are many of them, some in each scene, so those scenes just have to be good.

The action sequences are good, adrenaline-fueled and almost like videos, because many of them are followed and fitted with great and fast rhythms, maybe non-specific for this type of film, but for Richie very much.