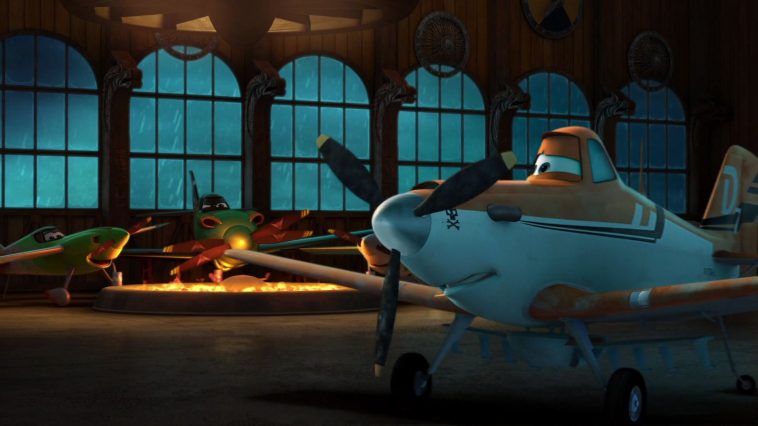 The main protagonist is the ambitious Dusty Cropoper, an agricultural plane that fantasizes about aerial stunts in the company of true flying champions. He is afraid of the heights of heaven, but in order to overcome his fear and acquire the necessary flying skills, which characterize true champions, he turns for help to the naval veteran Skipper, a military plane with combat experience from the Second World War.

A cute animated story, filled with strong emotions that motivate the main characters to follow their dream and achieve their goals. Dealing with topics such as friendship, love, courage, honesty and dedication, the director succeeds in forcing the ordinary viewer to identify with the animated characters. A series of discreetly conveyed messages, like the well-known one, in the style: overcoming your own limits to become better and reach the top, where you can taste victory, is a feature of serious feature films whose concept aims not only to provide fun, but also to have some broader significance, to underline that educational line.

Humorous sequences are definitely a trademark of an exciting aerial spectacle. I have to emphasize that all the characters are skillfully written, so it is understandable that we got a satisfactory dose of humor through witty dialogues. Unlike some other animated works, the effectively achieved authenticity in depicting the world of celestial spacecraft is easy to see, because care was taken of how airplanes are made and how they work, the laws of physics were respected (normally within the limits appropriate to this genre). According to the established good custom, since this is a Disney production, it is difficult to find any objection from the technical aspect. The high quality of the animation ensured that everything was visually attractive and that the desired aesthetic was certainly achieved.

The entire plot is spiced with excellent musical support, so that an adequate lively atmosphere is created, and that is exactly what characterizes such hilarious adventures. Unobtrusive, expectedly good synchronization of the voices of several renowned, but also relatively anonymous actors, gives the illusion that, from today’s perspective, making a feature-length animated film is a matter of pure routine. The international cast managed to enrich the whole story with various accents of several important protagonists and give it a special charm.

In essence, Planes has fulfilled the purpose of its creation because it provides a sufficient amount of entertainment, and in some segments it will make you smile sweetly and maybe make you sympathize with some of the main characters.