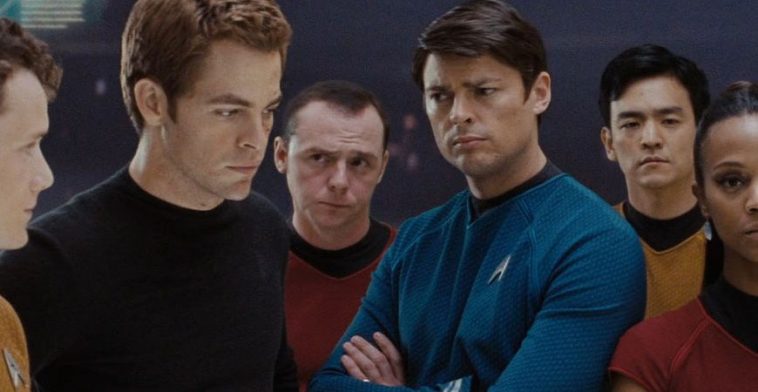 The year is 2233 and the Federation ship USS Kelvin set out to investigate an unusual storm. An unknown Romulan ship emerges from it and attacks Kelvin. From the Romulan ship, they demand that Captain Kelvin come on their ship. After interrogation, the Captain of the Romulans kills the captain. Kelvin is under attack again. First Officer George Kirk (Chris Hemsworth) takes over the management of the ship so that the others have time to evacuate, and among them his wife, whose birth has just begun. While everyone is fleeing in capsules, Kirk directs Kelvin towards the Romulan ship and causes a collision. George dies, but the others are saved, and James T. Kirk (Chris Hemsworth) is born.

Twenty-five years later, Kirk is at the Starfleet Academy. It is here that he meets the young Vulcan Spock (Zachary Quinto) for the first time, in not very friendly circumstances. Just then, all the ships were called into action because an unusual anomaly appeared in the immediate vicinity of the planet Vulcan. What is unusual is that the anomaly is identical to the one from twenty-five years ago when Kirk was born. The adventure begins, and with it the beginning of the legendary Kirk-Spock duo.

Although many so-called fans were skeptical before the release of the film, and many, the same ones, spat out the film quite a bit, I am completely satisfied with what J.J. Abrams did.

It was his choice to direct this film that was a complete success. Before that, Abrams directed only Impossible Mission 3, but he gained world fame and respect with the ultra-popular Lost series. After that, he worked on the very successful Fringe, and is currently recording the seventh part of the Star Wars saga Star Wars: The Force Awakens. The screenplay was written by the well-known and successful duo Roberto Orci and Alex Kurzman. What the three of them brought to the Star Trek franchise is that they adapted it to today’s standards and the wishes of the audience, which wants to see a tense, fierce and technically perfect sci-fi spectacle. That’s exactly what they did.

Abrams did a great job as a director. He used the ingeniously imagined time anomaly and time travel, and thus reborn Star Trek. All the characters are there, Starfleet, Enterprise, but with different circumstances that led the legendary team to gather. This enabled him to develop his story and adapt it to today’s time and technological possibilities. Furthermore, the film is technically perfectly done. The effects are at an exceptional level, as is the make-up itself, for which the film also won an Oscar, which is the only Oscar the franchise has won.

The scenes are rich, colorful and completely pleasing to the eye, whether it is the planet Earth and other planets, or the appearance of the Enterprise and its interior. Everything is maximally ironed, tidy and you can expect complete visual enjoyment from that side. Abrams gave a special charm through the different reflections that the camera captures, so that you feel as if you are behind it, or that you are completely in the scene. This little addition is later seen in many sci-fi movies and series.

The music was also carefully selected to follow the story. I was especially fascinated by the combination of sound effects with the lack of them. This is especially true of scenes when we enter the atmosphere, where before entering there is no sound but you watch a tense scene in complete silence, which makes it even more dramatic, and then suddenly, like entering the atmosphere, the sound comes and increases the tension to maximum .

The choice of actors was not an easy task because the legends of William Shatner and Leonard Nimoy in the roles of Kirk and Spock had to be replaced. This duo is almost sacred to millions of Star Trek fans. Although extremely demanding, Abrams did this job without a mistake. Although many doubted Chris Pine in the role of Kirk, in my opinion he did the job without a mistake. He gave the character of James T. Kirk the charisma that the legendary captain was expected to have, and I have no objections. That it wasn’t a coincidence, he confirmed in the following sequel to Star Trek: Into Darkness, where he was, perhaps, even better.

Perhaps an even more demanding task was choosing an actor for the character of Spock, perhaps the most impressive character in the entire franchise. Nimoy is simply Spock, whenever you ask, so Abrams was faced with a great temptation. Zahari Quint’s engagement for Spock’s character turned out to be a complete success, once again. I met Zachary right in the series Heroes, where he played the legendary Sajlar, and he was phenomenal there. This role was probably the biggest challenge in his career, however, although Spock one (Nimoj) Zahari became the new Spock. It is not enough to say that I am delighted with how he played and I think that the new generations got their Spock, when no one else will be able to replace him for a long time. The chemistry between Kirk and Spock is especially good, that is. Pine and Quinto managed, which many doubted, to completely revive the legendary characters.

The rest of the cast was also carefully chosen and Abrams scored a full goal there as well, again. Zoe Saldana as Uhura, Carl Urban as Bons, Simon Pegg as Scotty, John Cho as Sulu and Anton Yelchin as Chekov, all in line with the task , and I would especially like to point out Urban and Peg, who were in charge of the note of humor in the whole film, and they did it great. Eric Bana as Nero, the leader of the Romulans and the main villain, is just another plus for this film. And finally, a special addition, which raised all this good and quality, to another level, is the appearance of Nimoj in his legendary role, Spock.