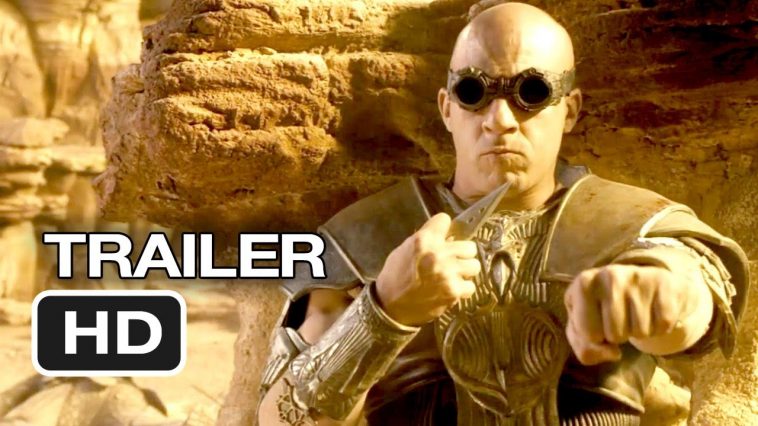 This year, it really happened a few times that a film exceeded my expectations and enabled me to leave the cinema in a good mood and satisfied. “Riddick” is definitely one of the more pleasant surprises of 2013.

At the very beginning of this review, I would like to point out that I am not an avid fan of films about this “outlaw”, nor an actor who portrays him. In fact, although it turned out nicely in several titles, I mostly try to avoid projects in which the main role is played by Vin Diesel – luckily, this time it wasn’t like that.

In the third sequel to this saga, we see again the “written off” Riddick who, for who knows how many times, was left to die on an unknown planet. Injured and exhausted, Riddick is forced to heal his own wounds and fight various predators that live in his immediate vicinity. After some time searching and exploring his new home, Ridick finds a certain base in which he activates a signal that will send two teams of mercenaries to this seemingly deserted planet to pick up the reward of delivering the head of the most famous outlaw from Fury.

The third part corrects the mistakes of the bombastic film “The Chronicles of Riddick”, “reduces the experience” and returns to what made the much cheaper “Pitch Black” a much more successful film. The stakes are definitely smaller, but that doesn’t mean there’s less action and excitement either.

“Riddick” is definitely interesting from its first to the last minute. It is one of the few sci-fi films that is not full of classic recycled jokes of this genre, but it is clear that a lot of effort and thought has been invested in this scenario. As for my personal impression, I would be quite satisfied if the film was completely dedicated to Ridok’s survival “through a stick and a rope” on this planet, although I have to write that I like the second act equally.

What makes this film so effective is that it doesn’t try to complicate things too much and get the thing out of realistic proportion, but rather concentrates on the narrative and tempo and tries to make them drinkable and exciting.

Visually, “Riddick” is definitely the best of all three films about the outlaw from Fury. The design of the planet on which the protagonist is located and its “locals” is extraordinary. The shots are great, as are the photos. Technically, “Riddick” respects all the elements needed to make a good sci-fi movie.

With a couple of worn-out interactions, it can be said that dialogues are in place. There are a few classic conversations here in which the actors “measure their organs for reproduction”, but come on, that’s ok because it fits the description of the characters.

The acting is also quite high quality in the film. For the first time, after who knows how many projects, I managed to experience Vina Diesel as an actor, not a mountain of meat. It is clear that this role lies with him and that he feels comfortable in it. I wouldn’t really single anyone out from the team of mercenaries because they are quite one-dimensional characters, but let’s say that we should mention the contribution of the star of the popular series “Battlestar Galactica” Katie Sackhoff, who, although the most inferior, is no less dangerous than other hunters. blackmailed heads.

“Riddick” is definitely the best sci-fi movie I’ve had a chance to watch this year. I suggest you watch this achievement in the cinema – it is really worth the time and attention!