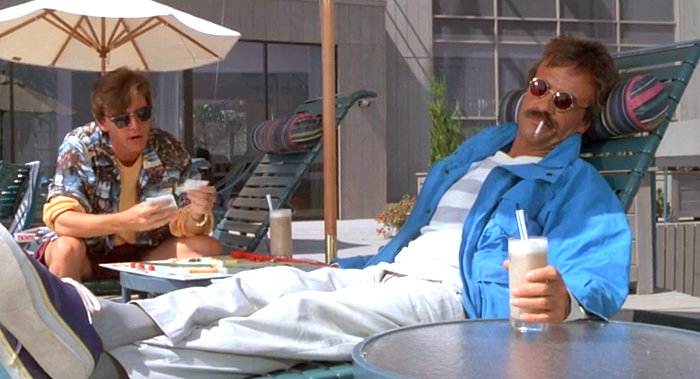 Larry (Andrew McCarthy) and Richard (Jonathan Silverman) are two young men and friends who work for a large insurance company. When they accidentally discover a fraud worth two million dollars, they go to their boss Bernie (Terry Kiser) who invites them to spend a weekend at his house on the beach and talk more about the case. Of course, they both enthusiastically accept the offer, unaware that their boss is actually hiding behind the scam and preparing a trap for them.

However, when Larry and Richard arrive at Bernie’s, they find him dead. Although they are in a panic, they decide to spend the weekend at Bernie’s house on the beach, making Bernie look alive and taking him everywhere with him. Only then does the real mess begin.

This great comedy from the late 80’s was directed by Canadian director and producer Ted Kochef, who is currently known for TV movies and work on the series Law and Order. Few people know that he is the director of the first Rambo (First Blood) and a very good war thriller Uncommon Valor with Gene Hackman, also from the 80’s. The weekend with Bernie is still his ID card, a comedy that should have deserved cult status because, in my opinion, this comedy was in a way a support for other similar-related projects on this topic that appeared later. The screenplay for the film was written by screenwriter Robert Klein, who wrote the screenplay for the not so successful sequel to this film, and for the first few episodes of the cult series M * A * S * H, and he collaborated with this director on a couple of other film projects.

Two idiots carrying a corpse. Today, it is difficult to make such a premise comical and fun, especially in this way and in today’s mainstream, but this McCarthy / Silverman duo succeeded. They conjured up that relaxed acting chemistry needed for a comedy-scene like this, and the real example is the scene from the beginning of the film when a robber tries to rob them, and Larry just nonchalantly takes his gun and says It’s too hot for a robbery. This is a true indicator of what this comedy and acting of the two main protagonists is based on.

They are relaxed, fun, funny, clumsy. Natural. It’s nice to watch them. That is not the case today in comedies, especially the most common ones, which are all full of some underestimating and unnatural humor that is slowly but surely starting to annoy everyone. Still, even though the guys did a great job, the biggest charm of the film for me is Bernie. His character is a cliché that he can’t be worse, but he is dead (in the film) and has the most important part of the job. He falls dead into possible and impossible situations that are occasionally so stupid that you have to laugh in agony. I will mention the then young Catherine Mary Stewart, who is the only important female character and who did a great job.

This is a comedy from the time when accidents were presented in some way, at the same time sympathetically harmless and funny. When humor did not have a cynical underestimating character, when some dangerous situations were placed in such a comic environment that you cannot resist without smiling from the heart. There are no such comedies today and that is why this film, no matter how silly it may seem to today’s audience, which is slowly getting used to a certain modern type of humor, has its value that does not pass, it just lacks a few reminders for which we are all almost obliged.