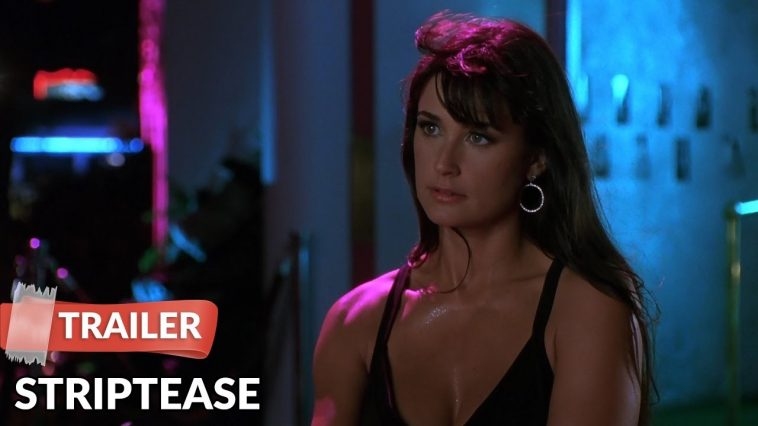 The origin of this project is closely connected with the film Showgirls, which is a product of a competing film studio. Given the potential financial gain predicted for him, Showgirls made very poor earnings and critics spared no negative reviews. The producers of Striptease realized that their project would not suffer a better fate either, but it was already too late to stop shooting and the film was rushed to the end

Based on the satirical novel by Karl Hiasen, the story is about Erin, who has just divorced Derel, a petty criminal and drug addict, when she recklessly marries and they start a fight over custody of their daughter. The judge is an old friend of Derel’s and assigns him a daughter, so the revolted Erin starts a fight for justice. The problem arises when she gets fired as an FBI secretary and she decides to get a job as an exotic dancer at a local club, even though she has no experience at all. Over time, she gains the favor of Congressman David, who turns out to be a fierce man when his blackmailer, a man who loves Erin and wants to help her, is found dead.

Demi Moore in the role of Erin Grant profited heavily from this film, and in return, in terms of acting, she provided almost nothing. Her egocentrism combined with the lack of acting talent makes her create aversion to the viewer instead of support and spontaneous cheering to succeed in her intention. Praise goes to the great Burt Reynolds, who played the role of a corrupt congressman, as well as to Wing Rhames, in the role of a benevolent bodyguard. It should be mentioned that the role of little Angela Grant was played by Rumer Willis, the daughter of Demi Moore and Bruce Willis.

The value of this film is shown by several “Golden Raspberry” awards that are given to film failures. When everything is added and subtracted, there is no film catastrophe, but still this is far from a watchable or good film.