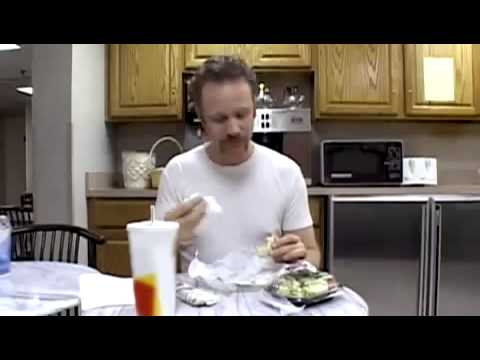 In this documentary, Morgan Sparlock deals with the question of the harmfulness of frequent eating in fast food restaurants. He conducted an experiment in which he was a guinea pig himself, and the test consisted of eating food and drinking for 30 days only from the McDonald’s retail chain.

Before the start of the experiment, Sparlock performed tests in which he checked the physical condition of his organism in detail, and it was concluded that he was a healthy athlete. According to him, he rarely eats in such restaurants, he has been eating his mother’s kitchen since birth, while lately he has dedicated himself to a diet in which the main base is vegetables. After the experiment, his tests showed numerous extreme changes, starting from substances in the blood and liver, all the way to changes in mood and sexual life. During the test, he constantly consulted with three doctors and a nutritionist, who said somewhere in the middle of the test that this experiment would leave lasting consequences on his body.

There are different views and opinions regarding this film. Most people knew before watching how harmful food is at McDonald’s, but Sparlock goes further and his experiment is the backbone of the film, which still includes numerous interviews with nutritionists, kitchen workers in US high schools, as well as prominent fighters. against promoting fast food. In addition, it deals with the issue of the impact on health and the creation of addiction to this type of diet in young children and proposes more innovative and cheaper, and yet healthier types of diet. On the other hand, there is a small percentage of people who eat like him during the experiment, but the fact is that this percentage is constantly increasing.

Sparlock, in addition to being the main actor, is also signed as a screenwriter and director. His style is reminiscent of typical American documentaries such as the works of Michael Moore. By frequently changing the presentation of his life during those thirty days, talking to doctors, interviewing various people and interesting animations, Sparlock makes sure that the viewers’ attention does not diminish.

If for no other reason, this documentary should be looked at in order to remind ourselves of the food we eat, to re-examine the quality of our diet, and what such a diet leads to, especially in young children.