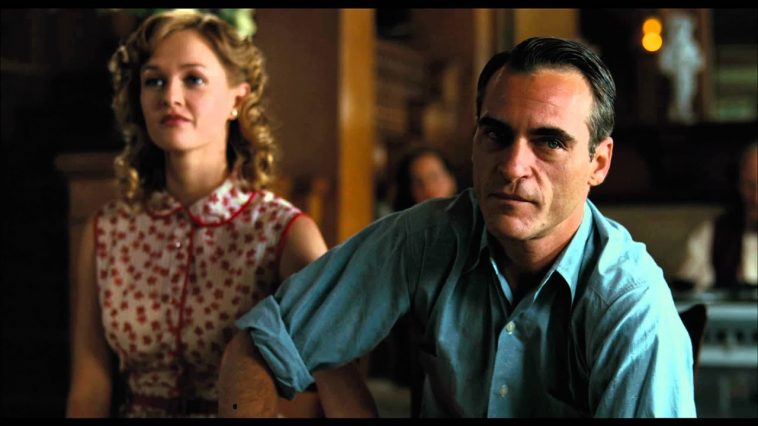 Paul Thomas Anderson is an author whose films generally do not appeal to a wider audience. Anderson belongs to a handful of those mainstream directors whose works do not garner huge commercial success, but try to offer something different, something special, something that does not fall into the circle of stupid and meaningless entertainment. The creator of films such as Boogie Nights, Magnolia and There Will Be Blood, works that deal with sociology, research human behavior and psychology and consciousness in general, seem extremely tiring to the average viewer, while those who are ready and willing to delve into the matter and analyze each subtly inserted layer separately, perceive these films as cult and revolutionary.

Banally speaking, The Master tells the story of the spiritually empty, constantly drunk wanderer Freddie Quill (Joaquin Phoenix), a man without purpose and motive in life, who finds refuge in the company of The Cause, a very specific religious group led by a charismatic scientist, doctor and writer Lancaster Dodd (Philip Seymour Hoffman). Of course, this kind of description does not in the least serve Anderson’s new project, nor does it manage to suggest what the primary focus of this very intriguing film is. Centered around the newly formed friendship between two absolutely different individuals, The Master in its subtle expression exposes rather harsh criticisms of Scientology and seeks to express hypocrisy, the need to control people and manipulate their consciousness through numerous sequences.

Anderson here rejects all the shackles of classical narrative exposition. Guided by the distortion of the consciousness of our subjects, The Master develops the action more through the mental journeys that the main duo embarks on from the moment of their first meeting, to the moment when they actually meet each other, than it does in the traditional sense of elaborating the story. For people who fail to grasp the point and goal of the film, it will seem as if almost nothing happened in something stronger than two hours, while those who realize the meaning will think that more has happened than they expected.

The whole plot is told from Freddie’s perspective, so the multitude of what is going on will be fairly subjectively presented and a large number of questions will eventually be left without any concrete answer, just like Freddie himself. The whole mystery of form and scenes that suddenly intersect the story are on the border of dream and reality, which again brings back to the question whether the director is trying to let us know in what mental state our protagonist is?

Although announced as a film aimed at criticizing Scientology, I need to point out that this is not the main theme of this achievement, but only a subplot. Viewers will only be connected to Scientology when almost two thirds of the film has passed, but by then the drama will have developed so intensively that it will completely surprise the connection of another critically fierce layer. The primary focus of the story is precisely on the relationship between two completely different characters who nicely disguise their products with each other, which in the end turns out to be both equally poisonous and harmful to the health of the consumer.

Of course, Anderson packed this so ingeniously and subtly, that is, he hid it under numerous intriguing layers that make a diversion and take the focus away from the essence and main message of the film, that the vast majority will miss the point of knowing the common thread of actors, but obviously he doesn’t care. I see the understanding of the protagonist’s relationship as a special gift from the author to his most intelligent fans, without the intention of making this sound pretentious. The Master has no heroes or villains, he simply paints people with the intention of dumping their poison and garbage in a nicely advertised way, in the style of convincing you to do a favor, instead of aiming to take advantage of you.

Despite the absolutely ingenious script, the greatest wealth of the film The Master still lies in its casting. Philip Seymour Hoffman, a man who often collaborates with Anderson, once again provided an extremely strong and memorable performance that is a very serious candidate for an Oscar. The biggest surprise is definitely the quality of the performance provided by Joaquin Phoenix. Although no one doubts his talent, after a stupid sarcastic documentary and a cynical performance with David Letterman, Phoenix has brought his career to the brink of ruin. Like I said, I knew Phoenix was an extremely capable actor, but I never expected such an intense and raw performance.

Freddie Quill is definitely the best thing Joaquin has shown in the film so far. In addition to a complete transformation of attitude, stuttering, flapping hands and an unbalanced look, Phoenix’s Freddie Quill can be described as a stray time bomb that can explode at any moment.